A new site called FairSpin wants to help users visualize and weigh-in on the biases of political news and commentary — and today it unveiled a new feature that takes the same approach to messages on microblogging site Twitter.

FairSpin pulls its articles from political news aggregator memeorandum. The site makes an “educated guess” about the article’s bias (liberal, neutral, or conservative) based on the history of the publication and author, and it lays the articles out in three columns based on those ratings. Then, once an article is up on the site, users can share their own impressions by voting to change or maintain the article’s rating.

Now, I had plenty of reservations about this concept, and it looks like I wasn’t the only one — at least judging from this blog post answering questions and criticisms. Several of the questions revolve around whether the site might be overrun by a specific political group. FairSpin points to various design features that prevent this, most notably:

Unlike many social media sites, FairSpin does not allow users to submit news stories.  This is because people may have different — and not always alturisic — motivations for submitting a particular story.  Instead, all stories are gathered automatically by the respected news aggregator memeorandum.  Since memeorandum has been around for a while and is almost entirely automated, it tends to be less biased and covers a broad and diverse set of sources.  Using memeorandum as our data source allows FairSpin to focus on the key challenge of detecting bias in the news instead of fighting two problems at once.

(This answer also helps explain how FairSpin is different from other sites that let users vote on news bias, such as Skewz.) 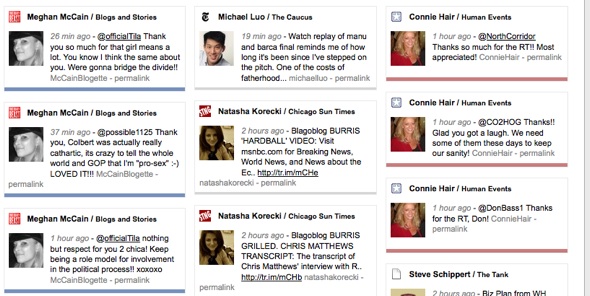 Things work a bit differently in FairSpin’s Twitter section — instead of focusing on individual tweets that were chosen by a third-party site, FairSpin just follows the accounts of “leading journalists and news bloggers,” and allows users to suggest other people to follow. It’s a cool idea underlining the fact that Twitter has become an important part of the media landscape. But it also brings in its share of silliness, largely because political journalists aren’t just political journalists when they’re on Twitter, anymore than I use my account to tweet about tech news exclusively. For example, FairSpin currently tells me that a complaint about magazines in the dentist’s office is “liberal” (maybe only liberals complain about Popular Mechanics?) while a barebones “Thanks for the retweet!” message is “conservative.”

Of course, I have my biases as well — I think that a journalist’s political beliefs are useful pieces of information, but far from the most important ones. I certainly hope that putting an article into a political column is the beginning of a conversation, rather than the end — sure it’s liberal or conservative, but what about whether it’s accurate or inaccurate? Relevant or irrelevant? FairSpin has an answer for that too: “We generally agree [that ‘left vs. right is a simplistic and unrealistic representation of bias in the real world’], and we have some ideas on better ways of representing this, but we started with what we have because it is something that everyone is familiar with and can relate to in some way.”

As for who that “we” is, FairSpin was created by Menlo Park, Calif.-based development company WorkingModel. The company’s founders include Stephen Hood, who previously ran social bookmarking site Delicious for Yahoo, and Dave Baggeroer, who teaches at Stanford’s Institute of Design. WorkingModel is in talks to raise a seed round of funding.