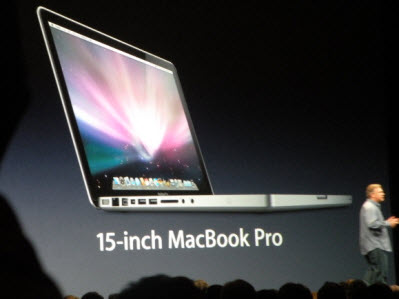 Apple executive Phil Schiller started the keynote at Apple’s Worldwide Developer Conference this morning with a focus on a new Mac laptop that drew plenty of oohs and ahs from the crowd of 5,000 attendees.

He showed off a new 15-inch MacBook Pro laptop with lithium polymer battery that gives up to seven hours of battery life. It can recharge 1,000 times, compared to 300 for normal batteries. The display has a 60 percent greater color gamut. It also has a new SD card slot for quickly uploading photos and videos.

A 17-inch version is available for $2,499, or $300 less than before. The machines are all shipping today. There is also a 13-inch MacBook Pro available with up to eight gigabytes of memory for $1,199. That’s less expensive than the 13-inch aluminum it replaces. That version comes with a 2.53 gigahertz microprocessor, 2 gigabytes of main memory. A four-gigabyte version costs $1,499.

The number of OS X active users has grown from a million in 2002 to 25 million in 2007, said Schiller, senior vice president at Apple and the stand-in for Apple chief executive Steve Jobs this morning. In the last two years, the user base has grown to nearly 75 million users. It looks like that number is going to grow with these new laptops.