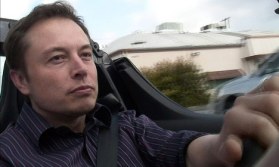 Martin Eberhard, founder of Tesla Motors, the anointed darling of the electric vehicle industry, has filed suit against the company and its current leader, Elon Musk (right), who he accuses of slander, mismanagement, and, bizarrely, giving him a damaged Tesla roadster (the firm’s first product).

Hostility between Eberhard and Musk is nothing new. The co-founder departed in 2007 after losing too many boardroom skirmishes to Musk (at that time the company’s lead investor). But when he left, it was agreed that he would receive one of the first roadsters produced — a special “founder’s series” model worth “as high as several million dollars.” Instead, he claims he not only received a regular model but a dented one at that (even though Tesla reportedly fixed it, and he graciously accepted).

Shortly thereafter, Musk made the rounds in the media, blaming him for the company’s financial woes and production delays, says Eberhard, who insists that Musk’s persnickety attention to detail and penchant for micromanagement derailed timelines and spending again and again. For these offenses, Eberhard is seeking both costs and damages (and of course hopes to restore his reputation).

This is not the first time Tesla has made an appearance in the California courts. Last April, the company unsuccessfully sued one of its former designers, Henrik Fisker, and his business partner Bernard Koehler, for allegedly stealing proprietary information for their new hybrid-electric vehicle firm Fisker Automotive (maker of the luxurious Karma sports car). Before that, Tesla was hauled into court by Magna Powertrain, the company that built the roadster’s two-speed transmission. It accused the car maker of failing to pay for the design. All this, on Musk’s watch.

But Musk, who is known as a colorful and controversial character in Silicon Valley circles, seems to be forging ahead undeterred. Tesla announced the delivery of its 500th roadster recently and is in the middle of developing its new, supposedly more affordable sedan, the Model S, after receiving a sizable chunk of funding from Daimler. In the meantime, Musk — who made the bulk of his wealth as an early investor in PayPal — is devoting more attention to his SpaceX rocket company, which is working on cheapening space travel.

As for the company, Tesla has responded to the suit with this statement: “This lawsuit is a fictionalized, inaccurate account of Tesla’s early years . . . it’s twisted and wrong and we welcome the opportunity to set the record straight.” Its spokeswoman, Rachel Konrad, also said the company intends to counter sue in order to clear its name.