SlideRocket, maker of an application that allows multiple individuals to collaborate on media-rich presentations, has brought in $5 million in a second round of funding to continue developing the platform and to expand its headcount.

Based in San Francisco, the company says its product breaks through the limitations of traditional PowerPoint presentations to give users the next level of tools in the cloud. The most different feature, perhaps, is the ability to use SlideRocket to share and collaborate on presentations.

In addition to providing tools to actually create slideshows, the startup allows users to manage their media and presentations with an online dashboard. That way they can keep a library of slideshows to refer back to in the future — an option that could come in handy for companies or project teams looking to build institutional memory. Also unique is that SlideRocket allows users to see who is accessing their presentations online and which slides they view the most — feedback that could influence how they craft their presentations in the future. 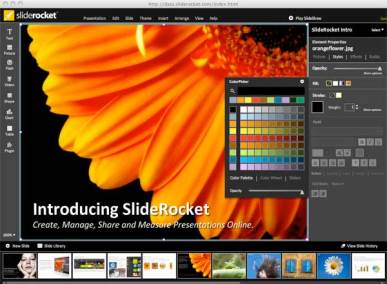 Once presentations have been built, SlideRocket lets users embed them elsewhere, distribute them through email or other means — and, perhaps most importantly, it lets them turn presentations into conference mode (very similar to WebEx, for example), so that audience members can tune in and view a presentation simultaneously as it is delivered.

In addition to its new funding, the company announced today the appointment of Chuck Dietrich as chief executive officer. He joins the company from Salesforce.com, where he served as general manager and vice president. In this role, he managed applications that help employees at various companies share information online and via their mobile phones. Company co-founder Mitch Grasso will become chief technology officer.