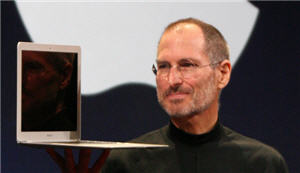 My fellow San Franciscans have been in-your-face Apple zealots for decades. But industry analysts NPD now claim shockingly that we’ve become the norm. NPD analysts are going around saying that nine out of ten dollars spent in the U.S. on computers costing $1,000 or more go to Apple. NPD doesn’t have an official report, but the company was quoted by Betanews reporter Joe Wilcox. The 91 percent figure is not only insanely high, it’s a 50 percent leap from NPD’s claim in the first quarter 2008 that Apple’s revenue market share was 66 percent.

Is this true? How is it possible? NPD vice president of industry analysis Stephen Baker says it’s simple: “The average price of a non-netbook Windows PC is under $600. It’s hard to see what functionality you could add to a Windows notebook to make it worth $1,200 to $1,500 to someone.”

So what is Apple giving people for an extra thousand or two thousand dollars? “Apple is giving them Apple,” Baker said. “They’re the only ones willing to sell computers at that price level. They’re like Mercedes that way. In tech, we tend to think performance is most important, but most people want functionality. Yet there are lots of people who want to say, ‘I want to be cool and drive around in a fancy car.’ An Apple computer makes you cool, it makes other people jealous.”

I have to agree. I carried Matt Marshall’s old Fujitsu laptop into last week’s MobileBeat 2009 conference, and people actually asked why I didn’t have a PowerBook. The Fujitsu seemed wrong under my arm, they said.

I’m still skeptical about the 91 percent figure. If true, it says more about the lack of high-end sales for Windows notebooks. Microsoft’s “Laptop Hunters” TV ads used $1,000 as the cutoff point for a new laptop. It’s hard to believe only 10% of notebook/desktop spending is going toward HP, Dell, Lenovo and the rest. Are you an analyst with a contrary opinion? Email me at paul@venturebeat.com.