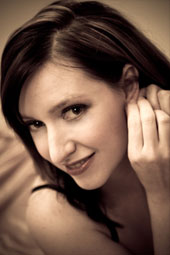 Cyan Banister, co-founder of adult photography community site Zivity — a place where photographers and models post cheesecakey photo shoots in hopes of attracting fans — has been wrestling with the site’s slower-than-hoped-for growth rate since Zivity launched in 2007.

Last week, Zivity’s board approved an unusual restructuring: Most of the company’s resources have been split off into Top Fans, based around a celebrity-fandom site Zivity had launched in April as a separate revenue-chasing strategy. Banister gets to run what’s left of Zivity. (The company also makes the MySpace app War of the Roses.)

Zivity’s original investors, who number over a dozen, plus Banister and her husband Scott, will remain shareholders of Zivity. Bluerun Ventures and The Founders Fund, who invested in Zivity in May of last year, will become owners only of Top Fans.

What happened? Banister told VentureBeat on a phone call today, “What it came down to is I’m really passionate about Zivity. It’s kind of my baby. I brought it up in a board meeting that I’d like to buy it.” Instead the other board members concocted the split. Banister has become CEO of Zivity and has three employees. Former Zivity CEO Jon Elvekrog is now CEO of Top Fans, which has acquired six ex-Zivity employees.

In effect, Banister has gotten the OK from investors to grow at a slower rate than Top Fans. Zivity’s traffic is “not fantabulous,” she admitted. The company has about 20,000 active users out of around 50,000 signups.

As it became obvious that Zivity wasn’t going to rake in the big money company investors wanted, they began looking for ways to boost revenue — ways that Banister felt would undermine the site’s fledgling community vibe.

Now, she says, she’ll be able to grow Zivity to a smaller size, which she believes is simply its natural growth curve. “There’s plenty of room for companies that are at 20 to 30 million,” she said. “But [the new investors] were looking for 10x returns. That would’ve been $100 to $200 million. It puts unnatural pressures on your business if your biz is not intended to grow in that way.”