Flickr’s new search designed to encourage much higher traffic levels — The photo-sharing site, owned by Yahoo, has launched a new search engine with several smart new features designed to raise traffic by seducing users to search, rather than by forcing them to hop through extra pageviews. You can choose from a selection of different image sizes on results pages. Images have a rollover “i” icon that pops up summary information on that specific photo. A sidebar links to photographers, groups, tag clusters and locations Flickr’s search tool deems relevant to your search. And finally, it finds that shot of me smooching TechCrunch’s Mike Arrington during my Valleywag days.

Obama appoints Athenahealth co-founder to CTO of Health and Human Services, makes him $45 richer in the process — Todd Park co-founded Athenahealth, which lets doctors handle their office administrative needs online, in 1997. Ten years later, the company finally went public in late 2007. Last year, healthcare IT site HIStalk interviewed Park on his decision then to retire. Now that Park is back in action, he’ll need to divest himself of his stake in Athenahealth, the Boston Business Journal reports, which the BBJ says will give Park a $45 million profit. 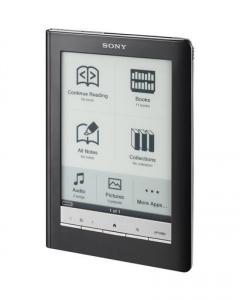 Sony debuts new e-readers, drops price of e-books to 10 bucks — Following Amazon’s lead, Sony has lowered the price of bestsellers and new titles from $11.99 to $9.99. The price drop accompanies the launch of two new readers that use Sony’s advanced e-paper display: The $199 Reader Pocket Edition and the $299 Reader Touch Edition pictured here. Both will be sold at Wal-mart and Best Buy. The New York Times reports that book publishers are not crazy about Sony’s new pricing, because they fear it will undermine sales of hardcover books. But Sony’s readers have so far not been bestsellers themselves, so the threat may be imaginary.

Apple lists mystery “iProd” device in new iPhone software configuration menu — Am I the only who thinks the name is lame? Software developers who got the beta version of the upcomnig iPhone 3.1 operating system spotted the iProd entries in the USBDeviceConfiguration.plist file. Ars Technica has a screenshot, but I’ll bet a buck that the iProd name is a red herring. It just doesn’t sing the way “iPod” and “iPhone” do. It feels like an Onion parody name.

The Pentagon has launched a study of if and how U.S. soldiers should use social networks — It’s tempting to write this off as the pencil-pushers once again detecting that somewhere, a soldier is having fun and must be stopped. But the threats are serious: A Twitter virus hit users earlier this year, proving that it’s possible to exploit the system. And over where the action is, commanders worry legitimately that 19-year-old soldiers tweeting away their idle hours may unwittingly tip the bad guys off to information that can be used against our friendlies. The Los Angeles Times rounds up quotes from the military.