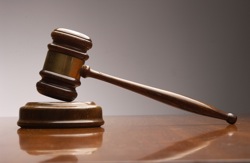 A U.S. District Court judge in Texas has ordered Microsoft to stop selling the latest version of its Word software. And yes, that’s the same Word that’s part of Microsoft Office, a product that supposedly has 500 million users (although only half of them pay).

That news comes from The Seattle PI’s Microsoft Blog, which also notes that the decision was made in Texas’ Eastern District, which is known for being “a haven for patent litigation.” Judge Leonard Davis’ injunction (which I’ve embedded at the end of this post) doesn’t just forbid Microsoft from selling Word. In ruling against the software giant in a lawsuit filed by i4i, in which the Toronto-based company alleges Microsoft violated its patent on a method for opening XML files, Davis writes:

Oh, and Davis also awarded i4i $240 million in damages. Naturally, Microsoft says it plans to appeal. Of course, it’s hard to imagine any scenario where this will actually affect your ability to buy Microsoft Word — indeed, i4i probably doesn’t want that to happen, since its products include XML tools for Word — but the decision could end up costing Microsoft a sizable amount of money, either in lawyer’s fees or in whatever it needs to pay i4i to bring the litigation to a close.