Personal finance site Mint.com raked in another $14 million in funding, bringing its total to $31 million. The round was led by DAG Ventures, with new financing from Founders Fund and a top-up from existing investors Benchmark Capital, Shasta Ventures, First Round Capital and Sherpalo.

Although the valuation wasn’t released, “it is a decidedly up-round” and it was “pre-emptive,” meaning Mint.com didn’t raise the funding because it was running out of cash. The company now has 1.4 million registered users, up from 1 million in March and is tracking $175 billion in transactions, $47 billion in assets and has identified $300 million in potential savings for its users. Revenue is eight times what it was last year, according to CEO Aaron Patzer.

Mint is a finance service that helps you manage your checking, savings and credit card accounts. When you sign up, you provide Mint with access to all of your accounts and the company automatically categorizes each paycheck and each expenditure. It shows you exactly how you’re spending your money by giving you visual graphs and pie charts. The entire process takes a matter of minutes.

Because Mint.com samples about 2 percent of online U.S. households, they’ve been tracking economic trends through user data. Below is some data they released today that looks at premium versus discount grocery spending during the recession. 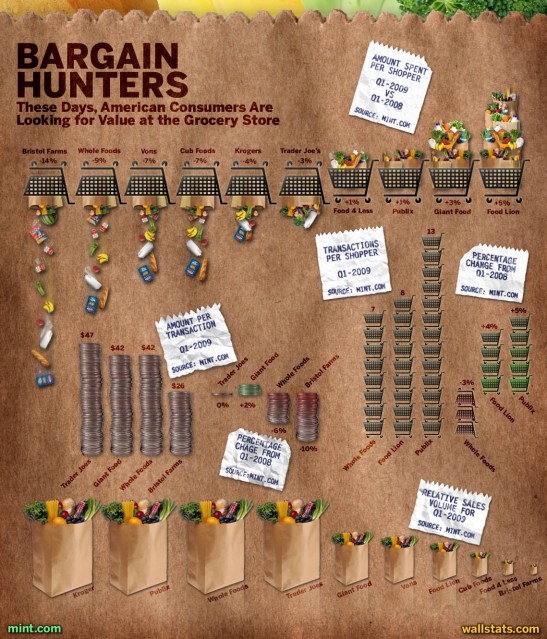