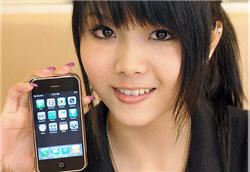 The sales slump that’s undermined U.S. and European carriers finally made its way to China this past quarter. The world’s largest wireless carrier, China Mobile, reported its first drop in profits since 1999 last week. Yesterday, the country’s second and third largest carriers, China Unicom and China Telecom, also reported slumping business. China Telecom reported a 29 percent drop in net revenue and warned that its profitability date may be postponed by up to a year, due in part to increased handset subsidies on which the company is spending in order to lure customers from other carriers. China Unicom’s first-half profit fell 42 percent, to just under $1 billion.

Chinese carriers are hitting the same wall that American carriers did, as the slumping global economy makes consumers wary of buying new cellphones. But all three carriers underwent restructuring earlier this year, and all are looking to smartphones to turn around consumer spending on their products. An estimated one million unlocked iPhones have already made it into callers’ hands, but iPhone sales are about to blast off: China Unicom and Apple just announced a three-year deal under which China Unicom will buy 5 million iPhones in two different models for $1.46 billion, and resell them to customers itself rather than serving as a storefront for sales to Apple.

Also unlike AT&T’s U.S. iPhone partnership, China Unicom won’t be sharing revenue with Apple. Steve Jobs’ firm is simply a handset maker. And there’ll be competing options for smartphone buyers. After rejecting a deal with Apple last year, China Mobile has deals with Dell and HTC to build smartphones. China Telecom is, you guessed it, working on a deal to sell the Palm Pre.

It’s a tired old joke, but with 687 million wireless subscribers in China, all Apple, Palm or HTC need do to get rich is get 10 percent of the Chinese to buy one phone. To do that, though, they’re going to have to get past Nokia, which currently claims nearly 200 million handsets in use.

To connect all these phones, the Chinese government has handed out licenses for all three carriers to build out their networks, assigning different wireless technologies for each carrier. China Mobile has dibs on TD-SCDMA, the government’s official national standard. China Telecom has license to build CDMA 2000 much like those in America that support 1xRTT and EV-DO networks. China Unicom is licensed for WCDMA, the 3G tech currently found in Apple’s iPhones. Don’t read too much into the Wall Street Journal’s statement this morning that “Unicom’s 3G network is the only one among three in China that is currently technologically compatible with the iPhone.” Technologically speaking, changing the wireless network chips to make iPhones for the other networks is easily doable and affordable, as Apple’s failed negotiations with China Mobile make clear. Any smartphone can be matched to any network if the price is right.