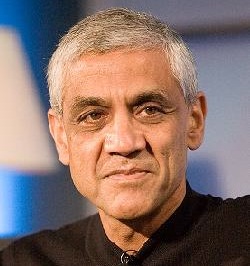 Looks like not everyone’s afraid of the ongoing shakeup of the venture capital industry. Khosla Ventures, the firm headed by Sun Microsystems co-founder Vinod Khosla, has raised two funds totaling $1.1 billion to invest mostly into companies seeking to clean up the environment.

We already wrote that Khosla was raising the funds, but the New York Times has confirmed that he’s pulled together the money.

There’s a primary $800 million fund that Khosla will use to make investments of between $5 million and $15 million, plus a seed-stage fund of $275 million, from which he’ll make investments of around $2 million. Khosla Ventures previously invested Khosla’s own money, but this is the first time it has raised a fund from limited partners, making it the largest first-time venture capital fund raised since 1999. Both funds will focus on cleantech and information technology (IT). Before launching his own venture fund in 2004, Khosla had served as a partner at one of the valley’s leading venture firms, Kleiner Perkins Caufield & Byers, which also has focused heavily on green investing in recent years.

Still, the news is further evidence of Khosla’s contrarian streak: Not only is he talking about making massive investments at a time when everyone is emphasizing smaller, safer deals, but he’s focusing on cleantech in a year when cleantech funding has fallen dramatically. Many observers had started to wonder whether Khosla’s huge bets on cleantech in recent years were at risk. After raising such a huge fund, he now arguably has the reserves to protect many of his investments, although most funds are governed by clauses that don’t let new money follow the money invested in previous funds (precisely to avoid good money follow bad). In his comments to The Times, Khosla downplays the risks.