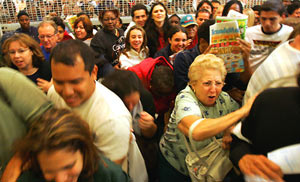 If the online masses can be harnessed to the millions for YouTube videos and protests, it’s only a mental hop, skip and jump to organizing the same for shopping deals.

That’s what LivingSocial is trying to tap into with its “Deals” service launching in New York City today.

The premise is simple: Get a local business to offer a deal only if a certain number of people sign up. Send it out on Facebook and if the crowd can round up enough people, the deal is on. There are extra little incentives built in to make it more viral. If a Facebook user can recruit three others to back the deal, they get the offer for free. LivingSocial gets a cut of the business it generates for the local merchant if the deal goes through.

“Group purchasing power makes a ton of sense in a Facebook-type of environment where it’s easy to share and get people to hop on something,” said LivingSocial’s CEO Tim O’Shaughnessy. “It’s a very interesting time right now too as consumers have sensed a paradigm shift in terms of how they save money.”

Crowd-powered buying may not be as sexy as Facebook-organized charity through companies like Causes, but it could be an important trend, and one that tacks on an additional (functioning!) revenue model for social networking.

The Chinese have been doing this for years. It’s called team-buying or tuangou. A group of Chinese shoppers, often strangers, will show up a specific time at a store and demand a discount for refrigerators or toasters or walk away. Store-owners, recognizing that they can get volume in sales, often acquiesce. LivingSocial is like a Facebook-organized variation of this. It’s a little different in that the company negotiates a deal ahead of time (because Americans are more culturally averse to bargaining.)

There also a few startups have have tapped into the same trend. Groupon, a Chicago-based company, gives away a mass coupon a day in cities around the country while Virgance, a San Francisco environment-focused startup, negotiates lower solar installation prices by rounding up large groups of homeowners to go “off the grid” and switch to solar energy.

LivingSocial has seen a few successes already. After launching the program in Washington D.C., it sold 200 90-minute massages and a $175-deal to make 30 bottles of custom wine with your own label. The approach isn’t super-scalable yet — salespeople individually organize each deal.

The startup began as a review site and has since become the third most popular Facebook app, with close to 24 million users, according to AppData. It is based in Washington, D.C. and raised $5 million from Grotech Ventures and former AOL CEO Steve Case.