Examiner.com, the media company known best for its right-leaning owner, Philip Anschutz, announced that it has purchased citizen journalism-driven web site NowPublic. The price was undisclosed, but PaidContent pegged the sale price $25 million. 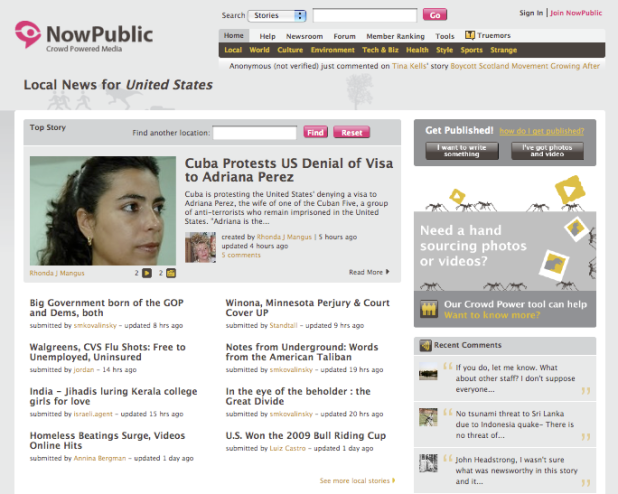 The site collects and disseminates news articles from hundreds of writers in 160 countries around the globe, most without any journalistic training. Its connection to location is particularly interesting, allowing viewers to easily find news relevant to their local areas.

This is the feature that probably appeals most to Examiner.com and its parent company, Clarity Digital Group. While the site will continue to stand on its own, its technology will be used to strengthen and scale Examiner’s existing portfolio of 109 local news portals that popped up last year. Specifically, it plans to expand into markets in the U.K., Australia, India and the Philippines.

The New York Times lumps the deal in with others like it — highlighting a trend toward big media companies acquiring hyperlocal news tools. Prime among them is AOL’s June acquisition of Patch and Going, two startups that track local news and events in New Jersey and Connecticut and San Francisco, respectively. These announcements are also indicative of citizen journalism’s more legitimate role in the mainstream media. All signs point to more major media organizations relying on user-generated content, especially as traditional print news outlets falter and local advertising continues to generate revenue.

Based in Vancouver, the four-year-old NowPublic is unique in its use of amateur reporters — essentially taking Examiner’s model a step further. Only a year old, the latter has grown rapidly from 60 paid contributors, referred to as “examiners,” in five cities to 16,000, now drawing 17 million unique visitors a month. The company says its NowPublic buy will increase its number of contributors to 30,000.

NowPublic previously raised $12 million between a $1.4 million angel round in 2006 and a $10.6 million first round of venture financing in 2007 from Brightspark Ventures, Rho Capital Ventures and GrowthWorks Capital. Rose Tech Ventures provided seed money.