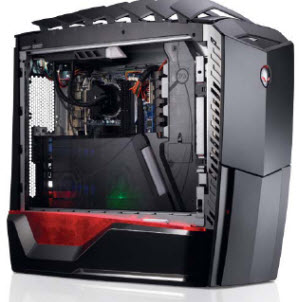 Dell and its Alienware game computer division are unveiling computers today that are meant for the hard-charging enthusiasts who want to play a lot of games and watch a lot of high-definition video on their computers.

Today, Alienware is announcing two new gaming desktop computers and a new gaming laptop that will use the latest Intel chips. The machines will ship in October in time for the launch of Windows 7 on Oct. 22.

The Alienware Area-51 ALX desktop computer (pictured right with open chassis) is a full-sized desktop with Intel’s new Core i7 microprocessors. The top-of-the-line machine includes a liquid cooling unit and a 1,100-kilowatt power supply. Alienware will overclock, or run the Intel chip at faster than recommended speed, to as much as 3.86 gigahertz. It uses twin Nvidia GTX 295 graphics cards. 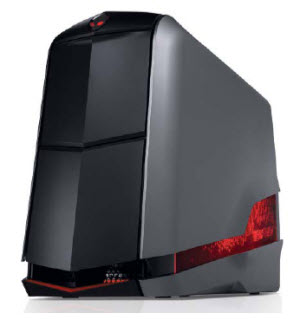 Alienware’s second new desktop is the Aurora ALX machine. It has an Intel Core i7 microprocessor running at 3.6 gigahertz. And it uses a screaming new Advanced Micro Devices ATI Radeon HD 5800 series graphics chip that is also being unveiled today.

They both have the signature alien head — with eyes that light up — at the top front of the machine. In past models, the alien head has been a power button; but now it releases the front door, which comes down in slow motion. You can also press a button that opens up the air vents on the machine’s top and sides. On top of the machine, you can access headphone jacks and universal serial bus ports.

You can open up the Area-51 ALX machine with doors that pop up, Lamborghini style. It has internal “theater” style LED lights that turn on when you’re changing a hard drive or otherwise swapping out some hardware. The hard drives are accessible on one side of the machine, while the processor and graphics cards are accessible via the other side. There are three sets of fans that continuously pump air across the units to ensure they don’t overheat when in heavy use. On the side are some hieroglphyics in Alienware’s own language which mean “Alienware.” 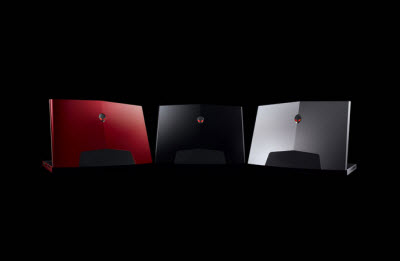 Alienware’s 17-inch M17x laptop has been out since June and is billed as the “most powerful laptop in the universe,” with dual Nvidia GTX 280 graphics chips. Now the company is launching the smaller 15-inch M15x. It resembles the bigger laptop but is lighter since its case is made out of a magnesium alloy, rather than anodized aluminum. It also has less powerful Nvidia GTX 240 or GTX 260 graphics chips and a Intel mobile Core i7 processor, the 2 gigahertz 920XM, being announced today. It weighs 9 pounds and starts at $1,499.

Alienware is unveiling the models this week at the Tokyo Game Show. All of them are upgradeable for free to Windows 7.

Meanwhile, Dell is also unveiling a new version of its Dell Studio 15, Studio XPS 16 and Studio 17 laptops. Introduced last year, the Studio series lets you choose from hundreds of different available art designs as the cover for your laptop. Dell’s designers are like curators who find hip artists doing cool work that can be showcased on the laptop covers.

The Studio 17 laptops will have a multitouch touchscreen option by the end of the year. Dell is one of the first to launch such a machine, though Lenovo launched its own multitouch screen laptop a week ago. Dell is selectively putting the touchscreens on some of its models and it will see how well they sell.