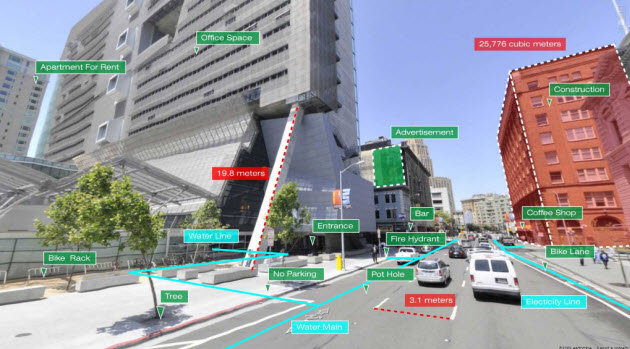 Earthmine released its own augmented reality application, Wild Style City, earlier this year. With that application, Earthmine captures 3-D views of cities and then lets artists draw fake graffiti all over them. Users can cruise through the streets of San Francisco and view the graffiti and other messages that others overlay on the real places.

Now the Berkeley, Calif.-based company is releasing a suite that lets others to do the same thing on smart phones and web sites. Earthmine’s data is spatially accurate. It can capture photos of places and then figure out the exact distance between spots. That makes it useful to architects, construction workers and all sorts of other professionals.

The company says its platform is a complete solution for hosting, processing and delivering street-level 3-D data. That means developers will be able to deliver apps that resemble Google’s StreetView app, where you can move down virtual streets and rotate to see a 360-degree view of them. The platform uses Adobe’s Flash software. The idea is to take advantage of the growth of interest in augmented reality, or a hybrid of reality and virtual environments that make the real world easier to decipher or more entertaining.

An iPhone app could access Earthmine’s database of panoramic imagery and lets users interact with it. Users could take measurements (see picture above), conduct local searches, and otherwise overlay map data on the images. Developers can access Earthmine’s tools at its web site. Earthmine has suggestions for how the developers can use its tools to create apps related to local search, augmented reality games, security and transportation.

Earthmine says it has customers and dozens of beta testers who have been making related products and data for more than 18 months.