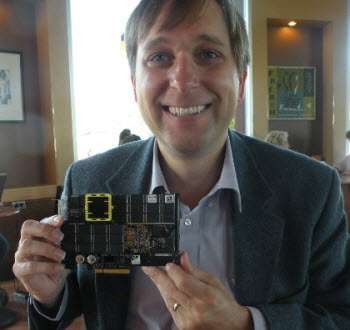 Fusion-io is announcing today that MySpace is adopting its power-saving flash memory cards across its huge data center operations.

The deal is a significant customer win for Fusion-io and an endorsement for its new way of storing data. It should garner more attention for the Salt Lake City-based company, which got a lot of notice earlier this year when Apple co-founder Steve Wozniak became its chief scientist.

Fusion-io cards can stack hundreds of NAND flash memory chips on a single board, storing anywhere from 80 gigabytes to 320 gigabytes on a card that can snap into a server. These cards can replace the hard disk drives in server systems and the system memory, known as dynamic random access memory.

In doing so, the Fusion-io cards can reduce the cost of the servers and their power consumption dramatically. The power requirements and cooling costs of the Fusion ioDrives are less than 1 percent of the hard disk arrays. The ioDrives can also be embedded inside the servers so they take up less rack space in a data center than hard drives. Thus, MySpace can reduce it electric power and floor-space costs. The flash memory, which is built with chips instead of mechanical parts, is also more reliable than mechanical disk drives. That’s why Fusion-io has more than 800 customers now, with each one paying anywhere from $3,000 to $12,000 per card. 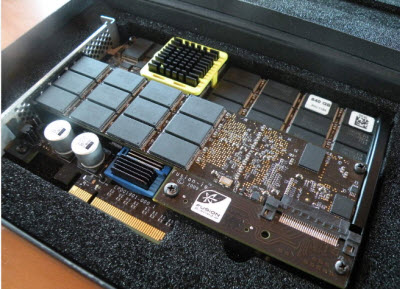 Fusion-io has been introducing products at a fast clip. A year ago, it shipped its first ioDrives. Now it is shipping ioDuo, a smaller and denser product. On top of MySpace, other customers are adopting it and talking about how it helps them. Wine.com uses the products to cut its power costs in half, double memory capacity, and triple the speed of its database performance. Now it can do a complete system backup in six minutes rather than two hours. In the next month, Fusion-io will ship an $895 consumer product, ioXtreme, for high-end consumer desktops.

MySpace looked at a variety of solutions, including Intel’s flash memory solutions. Other flash-based rivals include STEC and Samsung. STEC supplies flash drives to EMC, while Fusion-io is the supplier for Hewlett-Packard’s IO Accelerator product. Fusion-io also did project Quicksilver with IBM. Fusion-io tries to differentiate by making its memory self-healing, so the system doesn’t fail if one chip fails.

“A lot of people can throw flash on a board, but getting performance is more challenging,” said Flynn. “It’s hard to make it enterprise quality.”

Fusion-io won DEMOgod awards two years in a row and Rick White, founder of Fusion-io, is the only entrepreneur who has won three DEMOgod awards. The company, founded three and a half years ago, has raised $70 million in two round from investors, including New Enterprise Associates, Lightspeed Venture Partners, and Dell. Fusion-io has 200 employees. Year-over-year revenues are up 80 percent.