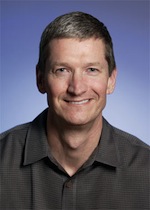 The iPhone was the hot new thing a year or two ago, but now it’s seeing increasing competition from Google, Palm, and others — for example, my editor Matt Marshall just declared that he’s abandoning his iPhone for Droid, the Android phone coming at the end of the month. Asked today about that competition, Apple chief operating officer Tim Cook said he’s not worried.

“I think they’re trying to catch up with the first iPhone that we released two years ago, and we’ve long since moved beyond that,” he said.

Cook didn’t offer any specific criticism, but he did note that the iPhone has strong momentum, and that in Apple’s just-released financial earnings, iPhone sales grew 7 percent from the same period last year. During the entire fiscal year, Apple sold about 21 million iPhones, a 78 percent increase from the previous year. That number may have been even higher, but the company had some trouble meeting the demand.

Cook was asked about iPhone usage in businesses, where Research in Motion’s BlackBerry devices are dominant. Employee demand for iPhone support is “very strong,” he said, and recent hardware and software improvements have helped address corporate IT concerns. The iPhone is now being used or tested in more than 50 percent of Fortune 100 and Financial Times 100 companies.

Cook also discussed Apple’s strategy of making exclusive deals with mobile carriers in different countries. That exclusivity is already coming to an end in some countries like the United Kingdom and Canada, and we can probably expect similar news in other countries soon. As it ends those deals, Apple won’t be increasing the wholesale price it charges carriers for the iPhone, Cook said, but the carriers might increase the prices they charge consumers for purchasing the phones.