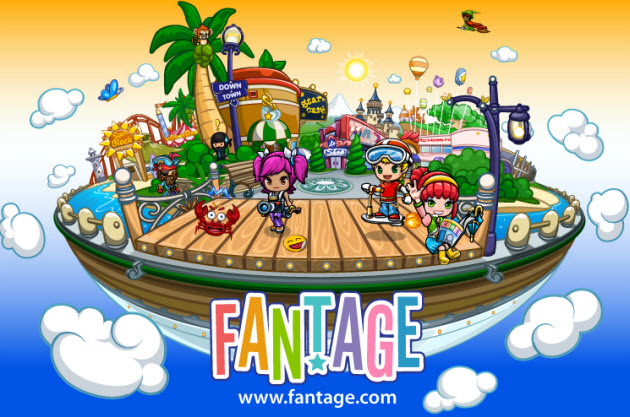 While many kids virtual worlds have come and gone, Fantage has quietly built an audience of 3 million registered users. Today, it is formally launching its web site.

The company has managed to do what lots of other kids sites have failed to do: get an audience by offering fun games and social activities in a safe, parent-friendly setting. And they did so just by observing kids, building what they like, and starting over when things didn’t work, said Peter Bae, vice president of marketing, in an interview. 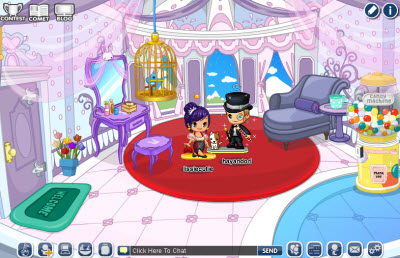 If the site keeps on growing, it will be a contender in the growing market for kids virtual world sites. It will also become a rarity among such sites: a profitable one. We noted earlier this year that there are 200 kids virtual worlds in development; Fantage has made it farther than most of them, but it still has a ways to go to catch up to the likes of Disney’s Club Penguin.

The company has traveled a long way. Bae and co-founder David Hwang were steeped in Korean online games. From their experience in that market, they learned the virtue of patience and experimentation. They started their company in January, 2007, in Palisades Park, N.J. This was Hwang’s third startup and Bae’s second. They hired some contract programmers and decided to build a site focused on online education. First, they tried an online math web site. It went nowhere.

Next, they decided to build a virtual world with built-in games for young kids. After a few months, they showed it to a focus groups of kids, who hated it. Bae and Hwang tossed it all out. Then they created what would become Fantage, (short for Fantastic Age) a fantasy world modeled after Disney’s Club Penguin.

As a web-connected virtual world, Fantage is a place where kids could create cartoon-like avatars and dress them up, chat with friends, and play simple games. The art is based on cute Japanese anime style, but with distinctly American twists. The characters have big heads, big eyes, and small bodies. They can do three gestures: wink, wave, and cry. And they can glide around on an air board. It’s a lot like the imagery in Gaia Online. It’s targeted at kids ages 7 to 14.

They launched the free beta site in April, 2008. The site was built on Adobe Flash, with no download required. They created all sorts of clothing and accessories for the kids to choose from. By May, the site had grown to 30,000 to 40,000 users. About 70 percent are girls. They started a premium membership that cost $5.99 a month. There are no ads, since parents don’t like advertisers selling stuff to their children.

They signed up Nexon, the South Korean online game publisher that has made huge hits such as Maplestory, as a strategic partner. Nexon made a minority investment in Fantage and signed the rights to become the publisher of the site in Europe and Japan. 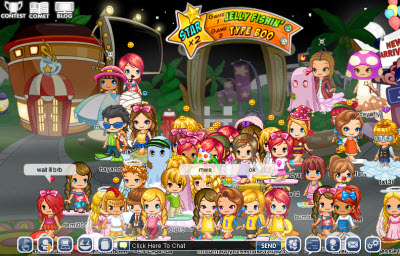 A year after the launch, the site hit a million registered users. Six months later, it hit two million users, and three months after that, it hit three million. Now the site gets 1.5 million unique visitors a month. While the numbers are by no means huge, the engagement is high, Bae said, at 55 minutes spent per session. Fantage keeps kids coming back by staging events such as an upcoming Halloween dress-up event.

Upon signing in, users pick the servers they want to join and then select a region they want to visit, such as uptown or downtown. If you want to do secret-agent style missions, you can head underground. You can earn medals and gifts by playing mini games. The site can fit a ridiculous number of kids on a page at the same time (see right). That’s something that annoys adults, but it seems to be fun for kids. Bae says the team learned that by looking at the covers of kids magazines, which are chaotic and filled with stuff, compared to clean and uncrowded adult magazine covers. 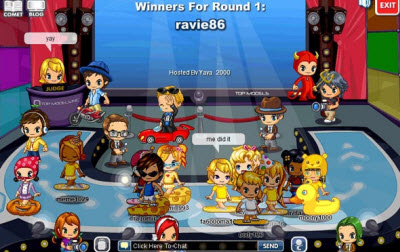 There are ways to convince free members to take out subscriptions. Premium members can show off the medals they earn in games, and they have more clothing choices. That matters in one of the most popular games, a fashion runway show where you have to compete against others as the best-dressed character, based on themes such as Hawaiian. Even though they’re using the relatively primitive Flash animations, Fantage can still stage simple multiplayer games.

The site is expanding to other countries such as Japan. There, the company will experiment with virtual goods, where players can buy items at small prices. Bae said the company isn’t yet trying out virtual goods in the U.S., since kids here aren’t equipped to pay for games with credit cards or even prepaid cards. The company updates the game on a daily basis to make sure it is responding to complaints and adding new stuff for users. 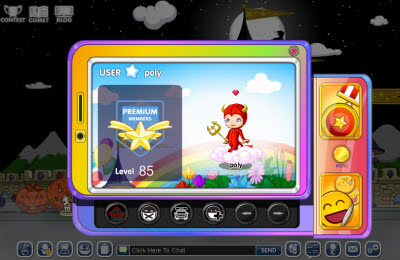 Fantage has 20 employees. There are lots of rivals out there. They include Club Penguin (which is around six times bigger in users), Dizzywood, Neopets, SuperSecret, Free Realms, Gala.net, Elf Island, Gaia Online, Dinokids and a bunch of others.

It’s a toss-up as to whether the company will make it, with so many rivals. It will likely have to spend money on marketing at some point, but so far has relied on viral word of mouth. About 75 percent of new users come through word of mouth, and another 25 percent come via online advertising. In the future, Bae said the company will team up with other portals to distribute its game world far and wide. Bae’s goal is ambitious: 10 million users by the end of 2010.

Bae said the company broke even early this year, but is losing money again because it spending more money on its expansion. By the end of this year, it expects to break even with revenues around $250,000 a month. The company isn’t raising money right now.