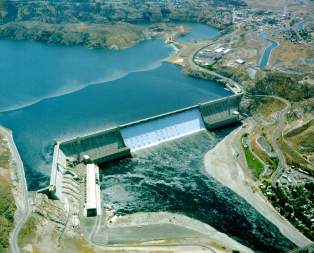 After decades spent working with the Army Corps of Engineers to dam every wild river in the region — most them more than once — the Tennessee Valley Authority is taking steps to go green.

As the largest public utility in the country, the TVA owns more than 32,000 megawatts of production capacity. Now, it has announced that it will buy 200 megawatts more from other projects in the Dakotas. These other projects, owned and operated by Maryland-based Competitive Power Ventures Renewable Energy (CPV) and Chicago-based Invenergy Wind, sold the assets in an auction including a total of 60 companies looking to sell power to the TVA. Many of these candidates dropped out because they were unable to offer prices competitive with future energy market prices.

So far, both companies are relatively small. Given that they will be shipping power from the Dakotas to the Tennessee Valley, it is unclear how they were able to offer a competitive bid for cheap wind power. More is to be revealed on this front as the deal progresses. Wind power from the Dakotas isn’t expected to be up and running until 2012.

The TVA was the first company in the region to add renewable power to its energy mix with its inaugural wind facility on top of Buffalo Mountain. That said, it has since been slow to follow up. Including the recent agreement with the two companies, TVA only operates 250 megawatts of renewable power. Hydroelectric generation accounts for an additional 4,200 megawatts with coal and nuclear making up the bulk of its sum of 32,000 megawatts.

VentureBeat is hosting GreenBeat, the seminal executive conference on the Smart Grid, on Nov. 18-19, featuring keynotes from Nobel Prize winner Al Gore and Kleiner Perkins’ John Doerr. Get your early-bird tickets for $625 before Oct. 31 at GreenBeat2009.com.