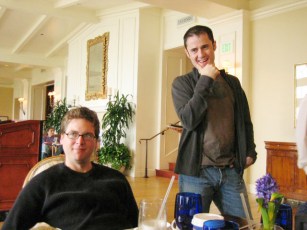 Twitter’s co-founders Biz Stone and Ev Williams are on-stage for a question-and-answer session. This is paraphrased, but I’ve embedded a video courtesy of Alexa Lee below, if you want to watch the whole segment.)

Jessica Livingston: What were your main motivations in starting Twitter?

Biz Stone: We should start with Odeo, our older podcasting service. We realized we weren’t passionate about it. We were building it but we weren’t using it. Jack Dorsey started Twitter and we gave him some freedom to work on it.

Ev Williams: We had a two-week hack day at Odeo to come up with something new. We split up the teams. We had 12 to 14 people and people proposed ideas. One of them was Twitter, which Jack had been thinking about for a long time.

Stone: We had two weeks. The idea was build it, show it, present it — if people liked it, we would stick with it. One afternoon I was working on the house with my wife and it was really, really hot. It was sweaty. And all of a sudden, I got a text message — it was Ev tweeting about sipping a pinot noir. And I was all, “What?!” And I realized I was really engaged with this product.

Early on people said Twitter is fun. It’s not useful. And Ev retorted, ‘So is ice cream. Should we ban ice cream?’ We realized we were engaged with it. It was right up our alley. The next thing that happened was SXSW 2007. That was a huge watershed moment for us. People were coordinating on Twitter to figure out which sessions were boring or interesting. They were using it to find bars.

Livingston: When you first launched it, did you have any idea on how big it would be?

Williams: And then we’re gonna go on Oprah.

Livingston: So scaling — [laughter! from the audience!] was it a difficult problem?

Williams: One of our biggest lessons time after time is to focus. Almost every time I meet with a startup and I give them feedback — it’s do fewer things. We suffered from this very early on with Twitter, even through it was in essence it was very simple. We were doing Twitter via IM and supporting it through AIM, when our core product didn’t work. Then we started pulling it in and some users got very angry.

Stone: Even with 10 people, we made an assumption that we knew what we were all working on. That was a wrong move. Even though you’re small, you still need to make a real effort at communication.

Williams: There are different approaches in starting companies. What I respect about Google is its “computer science” problem approach to business. We’re going to be the absolute best at this one thing and you build better algorithms to solve the problem. And then there are other strategies — like where you figure it out piece by piece. With Twitter, who the hell knew about our market size or justify an investment other than — it just made us laugh.

Stone: A lot of people said it sounded stupid. Even some of our engineers said they didn’t want to work on it. The whole point was that we were kind of giggling and we wanted to work on it. And that’s what happened with Blogger.

Audience: How is Ruby on Rails working out?

Williams: Still working. It handles a shitload of requests. It runs on a whole bunch of things that I don’t even understand. They don’t let me look at the code anymore. It used to be monolithic rails app with a MySQL database.

Audience: Was there any advice you got early on that you didn’t take that you wish you had?

Audience: Is there any advice you did take that was useful?

Livingston: What’s the most interesting use case you’ve seen with Twitter?

Stone: The thing that always comes to mind isn’t always a single tweet. It’s use cases where people have behaved in these altruistic ways and worked as a group. So a fuel shortage a year ago in Atlanta where people were using Twitter hash tags to tell each other where they could find gas. There were all these eye-openers — like tracking wildfires or learning that people were Twittering during earthquakes. The ground was shaking and we were getting real-time data about where and what was happening.

We named it Twitter because it’s a term for a short burst of information.

Livingston: So who was your first investor and how did you pitch them?

Stone turns to Williams — How did we pitch you?

Williams: Odeo was the first investor in Twitter. Our first outside investor was Fred Wilson of Union Square Ventures. He totally got it. We were reading his blog posts. We were lucky because we built it first.

Stone: Investors are employees you can never hire. We made sure to pick investors that thought like us.

Livingston: How important was a revenue plan early, early on?

Williams: It wasn’t important early on. There’s no blanket answer you can give to that. If you have a revenue plan early on, it’s way less risky than if you don’t. There are tons of businesses you can build that have a revenue plan from day on. We’ve never had any doubt if you can create something popular, you can make money. I have trouble citing things that are really popular that have died because they don’t make money. There’s huge advantages if you have revenue from day one.

Williams: The stakes are now really high. We’re not under the radar anymore. We’re going to face serious competition and we’re still as a company pretty small and have a lot of things to learn and to execute on. We have everything we need. We just need to do it.

Stone: The other challenge we’re facing is growing a company and culture. We’re building a technology. We’re building a product. And we’re building a company culture. We don’t want to be the child actor that grew up all crazy and freaky. We want to make sure we address that now and put a lot of resources into it, more than you think a two-year company would put into it. What social responsibility do we have? We partnered with Charity:Water and Room to Read and we’re looking into partnering with other organizations like that. We’re getting the team and company involved in that. Part of working at Twitter is giving back to the world. Our sort of mission is that the open exchange of information can have a positive impact on the world. We have to do a ton of things from a human resources perspective. It’s really hard to grow fast and maintain that culture and attention to it.

Livingston: What advice do you have for people developing products on top of Twitter?

Stone: Keep going and ask us.

Williams: We’ve been really fortunate with all the investment. A lot of the value of Twitter comes from third-party developers. We kinda leapt into that and we’re not blind to that. We’re really bolstering our platform team. There’s a lot of stuff yet to do there.

Livingston: Do you see yourselves going public?

Williams: It’s certainly possible. Our goal is to change the world. Because we think that’s the potential of Twitter. We’re going to build the best company we can to realize that. We don’t want to grow bigger than we need to, but that’s the driving factor. At some point, going public may make sense. It sounds silly with no revenue to think about going public. I used to say that’s ridiculous but I wouldn’t say that anymore. People say that no one goes public anymore, so that means you get acquired. But we could be more creative than that.

Stone: Really early on, week 4. This German contractor didn’t want to pay SMS fees from Germany. So he wanted to write something that would let him Twitter from IM. So we wrote an API for him. Some stuff happened. The Twitterific guys made this cool Mac app. They contacted us. We thought cool — a desktop app for Twitter. Previously, if you posted from the web, it said the web and if you posted from SMS, it said that. We should have a feature that shows where people have tweeted from, to give them credit. It’s hugely important. It helped us grow and create a lot of variety from our users.

Livingston: How will geolocation affect your business?

Williams: We are building geolocation into Twitter. We’ve had fledging support. You can search by location that would determine in a fuzzy way where you are. That’s not terribly useful. Obviously location is going to be huge. We don’t know. We embrace things that will change our business in ways we don’t know as long we think they’re powerful. We’re excited to see people work on it. We pick things that have the potential to create emergent behavior in the system.