Tonight’s insidery discussion on The Future of the Embargo was supposed to be a high-powered debate among top local tech journalists, in response to TechCrunch editor Michael Arrington’s gleeful ban of embargos. (Embargos are the publication times that PR people pre-set for stories). Arrington has a controversial opinion that “the embargo is dead,” and has ceased to honor unsolicited embargos at TechCrunch. Send him a press release and he’ll run a story about it now, not tomorrow at 5 a.m. as dictated by the embargo notice atop the document.

Tonight’s panel was spawned by the two conflicting approaches toward embargos — TechCrunch’s stance to officially ignore them, and the more customary stance to abide by them. VentureBeat editor Matt Marshall has openly affirmed his “we’ll take ’em” policy in support of embargos. Matt couldn’t make it to the panel, because he’s in Europe on business. But Mike actually agreed to go. A lot of us put it on our calendars and turned down other outings for tonight. Then on Monday afternoon, Mike abruptly canceled his appearance in a post to Twitter.

The discussion has turned into a meta-topic among the gossipy reporters who cover the local Internet economy: Why does Arrington agree to do events, then fail to show at them? The Web 2.0 kingmaker was tonight’s big draw, better-known and more sought after than New York Times technology chief Damon Darlin. Most local entrepre 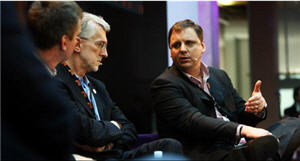 neurs couldn’t tell you who Darlin is. But they follow Arrington around like puppies, hoping for coverage.

This isn’t just insidery blogger gossip. The mainstream media follows Arrington around, too, treating him as a thought leader and power broker for the Web 2.0 economy. At right, a Getty Images photo of Big Mike and leading media pundit Jeff Jarvis chatting at the Digital Life Design conference in Munich. By contrast, there’s not a single shot of VentureBeat chief Matt Marshall in Getty Images. Arrington is a celebrity in our circle, not just a reporter.

But TechCrunch’s founder, unfortunately, is getting a rep as Mike No-Show Arrington. The guy commits to events that draw people, many of whom only want to see and meet Mike Arrington. But then he punts. In 2008, he left editor Erick Schonfeld to handle most of the company’s Crunchies awards event. Last month, he refused to come to the stage to give away the top prize at his own TechCrunch50 conference.

This week, he canceled three days before the wonky panel discussion at local bar and nightclub Varnish. The guy has fans, me included, so watching him cancel his appearance on Twitter was frustrating and odd. “I’m pretty sure I’m too sick to attend the event,” he tweeted at fellow participant Mark Glaser from PBS. “Sounds like a big setup.”

I texted Mike to ask why he changed his mind on short notice. “It just felt like the event was going to turn into a witch burning as opposed to a reasonable conversation,” he replied. “This is less about the organizers and more about the audience,” he added — the audience being predominantly journalists and PR people.

Not showing once isn’t a big deal, but with Arrington it’s become a pattern. The next time I see TechCrunch’s founder and editor-in-chief listed on an event, any event anywhere, I’ll have to presume he won’t be there.