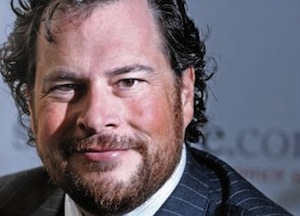 Marc Benioff has been the reliably outspoken chief executive of Salesforce.com for 10 years. Salesforce was one of the pioneers of the software-as-a-service business model, where traditional software is replaced by a web-based application that customers pay for via subscription, and he trumpeted the model with ads declaring that software is dead. Now that SaaS and cloud computing are becoming an increasing part of tech business models, Benioff said this spells big trouble for companies like Microsoft — he describes the software giant’s leaders as “trapped in their own psychosis” and says they will “drag their company into the gutter.”

Benioff has a new book out, Behind the Cloud (co-written with Carlye Adler). Billed as “the Salesforce.com playbook,” the book gives Benioff’s perspective on Salesforce’s history, and distills a business lesson from each anecdote. I interviewed Benioff over email about his book, his tips for entrepreneurs, and how Microsoft is “its own worst enemy.”

VentureBeat: In Behind the Cloud , you talk about dreaming up the software-as-a-service model while on sabbatical in Hawaii. Can you say a little more about the concept’s genesis? Were you consciously looking for a startup idea?

Marc Benioff: I was looking for something — and initially didn’t know that it would definitely be a startup. I was intrigued with what was going on with consumer websites such as Amazon.com and I knew the Internet had the potential to change everything for business customers as well. I always knew I wanted to be an entrepreneur. I started my own software company in high school and went to college to study entrepreneurship. Still, I had reservations about leaving Oracle, where I worked for more than a decade and had so many ties.

Of course what I was thinking about in Hawaii, and later in India, wasn’t just a new technology model, but also a new sales model, and a new integrated philanthropic model. As these ideas evolved, it became clear that they could only be pursued through a startup.

VB: I’m also interested in hearing about the decision to launch with a customer relationship management product. To what extent did your initial ambitions extend beyond CRM? Did SaaS and CRM just seem like a good match to start with?

MB: Yes, CRM was the right place to start, but I did not know that in the beginning. I first considered a human resources service, and even purchased the URL you.com. Human resources proved to have many complexities globally, though, and I wanted to do something that could reach people around the world.

I soon realized that CRM was an application category with revolutionary potential as it was a huge market; every company has some kind of sales force. It was also a category in which there was room for improvement. It was especially burdensome for the customer. It required maintenance and customization that needed months, or even years, to get right. It also required a hefty IT resource commitment, and more money than many companies wanted to spend on this aspect of their businesses. Replacing the traditional client-server model for cloud-delivered service that was simple and inexpensive seemed like a sure thing.

That said, it was always my intention to do more than CRM. I’ve always believed that there was the potential to see every kind of application delivered in the cloud. Of course, now that is exactly what is happening.

MB: In school all I wanted to do was build technology. That’s what I loved. But two of my entrepreneurship professors, Tom O’Malia and Mac Davis, had other ideas for me. They told me that the most successful business executives would be the ones who got real-world experience before starting their own companies. In their opinion, ‘‘real-world experience’’ was a sales position focused on building relationships with customers. They called it ‘‘carrying a bag.’’

Their advice led me to accept a job at Oracle, answering customer service calls that came into the software company’s 800 number. I didn’t want to be an 800-number operator, but taking that job was one of the most pivotal decisions of my life. I discovered that working with customers was much more fun than writing code.

Most of all, I discovered that in order to succeed with a product you must truly get to know your customers and build something for them. You have to give them what they want (not what you think they want). You can’t do that if you are sitting in an office tower writing code seven days a week with no contact with the outside world. Learning how to interact with customers is something that anyone starting any business must master. It’s an amazing opportunity to be able to learn the ropes at an established company and then employ your expertise at your own company.

VB: In the book, you talk about the need for CEOs to create a persona, and to openly challenge the big incumbents. With that in mind, to what extent should people take you seriously when you say, “Part of our mission is to end Microsoft“?

MB: Many CEOs are afraid to get too personal or step into the forefront and take risks, but the world’s best CEOs are indistinguishable from the companies they run. I think that CEOs must embrace a role that establishes them as thought leaders — this is what wins invitations to speak at events or be interviewed, which are opportunities to spread messages. This is what I mean by creating a persona; I don’t mean to suggest that CEOs should become someone they are not, or that they should say things they don’t believe.

Our mission has always been to change the way the software industry works, so of course we would want to have an impact on the industry’s largest player. Maybe some people don’t take us seriously, but we have a history of attacking much larger competitors. Perhaps people have found that preposterous at times, but look at what happened: a once-formidable competitor no longer exists [Siebel Systems, which was acquired by Oracle] and we continue to grow while most competitors are retrenching.

In the battle for relevance, Microsoft has been its own worst enemy. Its flagship product, Windows Vista, was one of the biggest failures in technology history. The Zune is more of a punch line than a product. But by far, Microsoft has failed to grasp this significance of cloud computing. They are making baby steps, but they are dragging their heels behind, not leading their customers, which is always a dangerous indicator for a technology company. (See also: IBM in the early ’90s.)

VB: How close do you think SaaS and cloud computing are to achieving their full potential, particularly in the enterprise market? Do you think SaaS will ever be seen as the primary channel for enterprise software, and if so, what needs to happen first?

MB: We are still in the early stages of cloud computing adoption in the enterprise. Applications like sales force automation and CRM were the among the first to move to the cloud. But we still believe there is plenty of room to grow there. Now there are many other areas like expense management, financials and HR that are moving the cloud as well. These are just beginning to scratch the surface.

Cloud platforms are gaining in popularity as well, and enterprises are looking to move their infrastructures and development platforms to the cloud in addition to their cloud platforms. This area is just beginning, but is growing very rapidly. For example, Japan Post, the world’s largest institution in terms of asset holding and Thompson Reuters, the leading financial information company, have standardized on our platform.

VB: Where do you see the next big opportunities for Salesforce to innovate?

MB: Right now, I am really excited about the huge shift in customer service. We know that customers search the web for answers, or reach out to friends on Facebook and Twitter. But typical client-server call center solutions aren’t aware of those community-generated answers. The Service Cloud 2, our vision for customer service, gives call center agents everything they need to find answers and communicate with customers through every possible channel: phone, email, chat, Web, and social networks. Customers are discussing a company’s products and brand now, in real time.

Companies need to join the conversation and we’re focused on providing innovative ways to do that.