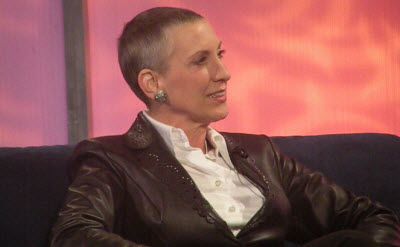 Carly Fiorina is reinventing herself as a politician today as she is expected to announce that she is running for the U.S. Senate seat in California that has been held for years by Democrat Barbara Boxer.

I say that she’s reinventing herself because she has played many roles over her career. First as a pioneering female executive at AT&T. Then as the change candidate inside Hewlett-Packard, always attempting to bring HP into the modern age. Then as the victim, unfairly (in her opinion) thrown out of HP. And more recently the fairly honest book author and breast cancer survivor.

If you look around the web this morning, you’ll see that everyone is dredging up photos from a while ago, when she had longer blonde hair. But we shot this photo at the Web 2.0 Summit, where she acknowledged her hair was growing back after falling out during her cancer treatment. There, she said she had seen the “best and the worst of the healthcare system.” I think you’ll find that, from the photos on the outside, to the person on the inside, this isn’t the same Carly Fiorina that was running HP. 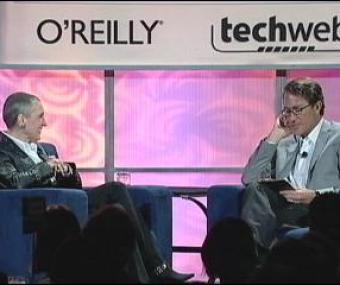 I found her views expressed at the  recent Web 2.0 Summit to be more nuanced than you would expect from a straight Republican platform candidate. Acting on behalf of Silicon Valley interests, she said there should be more support for technology in Washington. She wondered why there was a lot of money for construction in the stimulus bill, but nothing for the biotech industry. Clearly, then, she isn’t opposed to having the government intercede in the economy.

On the war in Afghanistan, she said she supported the Obama administration’s view that “nation building” approaches were appropriate. If you provide security and basic services — infrastructure, business opportunity, and education — for the civilian population, she said, you can win over civilian loyalty. That seems like it runs against the conservative view of how to fight the war.

I wasn’t so sure if she was going in the right direction on regulating the Internet. She said that she found it odd that the protections afforded to women and children in real life are not available to them on the Internet. That’s a vague statement that could be interpreted in a variety of ways. It sounds like she might advocate censorship of porn, suggesting more government regulation. But it also means that she advocates extending civil rights protection to women and children, even in the online world. There are plenty of people, from religious conservatives to Net Neutrality advocates who will want to hear more about her views on this.

Fiorina first has to beat Assemblyman Chuck DeVore in the Republican primary before she faces Boxer. She says she’s running because she realizes that the decisions made by the Senate impact every family and business. Like a Republican, she’s in favor of lowering taxes and controlling spending. She thinks that the government makes far too many decisions that people ought to be making for themselves.

On healthcare reform, she doesn’t believe a national health system is appropriate. She thinks there should be more community clinic access and restrictions on malpractice lawsuits.

It will be interesting to see if she can run a mistake-free campaign. At HP, she had lots of critics who felt that she didn’t keep a close enough eye on company operations, resulting in unexpected losses and a decline in the company’s valuation. After she was fired in 2005, her successor Mark Hurd has shown that the company can thrive under the right leadership.

Fiorina also messed up during John McCain’s failed presidential bid. She was an economic advisor to McCain, but she slipped when she said she didn’t think he was qualified to run a major corporation like HP. The McCain team cut her loose after the faux pas. I think the right strategy for Fiorina is to not run on her record, but to admit that she made a lot of mistakes. She has to run on being a candidate for change and argue that she has managed to change with the times herself.