With high speed Internet connections becoming widely available, the online video market is booming: 25 billion videos were viewed in September alone in the US, according to comScore statistics, twice as many as a year ago. This might get video-sharing site YouTube feeling all warm and cozy, dreaming about hitting break-even, but what about those people actually creating video content? When do they get to start seeing a profit? Romanian startup Brainient hopes to answer that question with its new video monetization platform, LayeredBrain, currently in beta testing.

LayeredBrain lets you add interactive elements to video content. For instance, if you have an iPod in your video, you can define a hotspot over it, attach a link to the product, and the link will automatically be converted to an affiliate link. The application supports around 7000 merchants and has access to over 65 million affiliate links so, unless you’re selling something really exotic, there’s a pretty good chance your product will be on that list. And if your videos feature the same product more than once, LayeredBrain will automatically detect and tag that product for you. The company’s developers are still playing with the detection technology, but they should have it in production within the next few months.

LayeredBrain also lets you create polls, cue points and chapter markers to guide viewers through the video, and add images or other elements on top of your video. 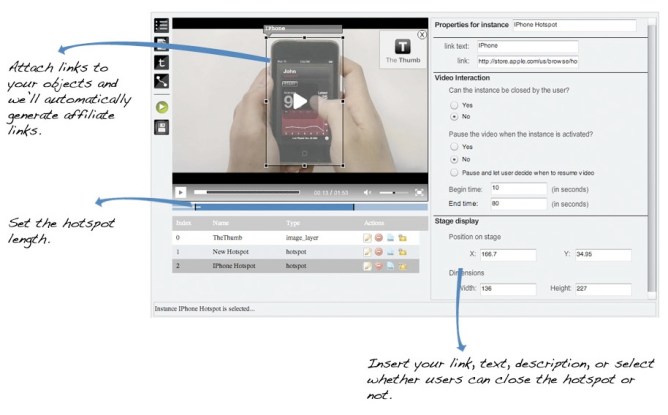 And if you’ve already got a favorite video-management platform, there’s not need to switch, since LayeredBrain can be integrated with other platforms such as Brightcove, Vimeo or a custom CMS, directly through an API. As far as advertising is concerned, you can set your own ad campaign, you can use the affiliate network or you can integrate ads from Doubleclick, Google Adsense or Brightroll.

LayeredBrain is not the only player on the interactive video advertising market. Innovid, an Israeli startup founded in 2007, focuses on placing interactive elements into videos for advertising purposes, two of their most spectacular features being the clickable canvas and the integration of 3D objects. However, Innovid doesn’t support integration with other video management platforms and with affiliate networks. Quick.tv is another competitor, UK based, that offers video advertising through interactive elements and also provides integration with popular video management platforms. Veeple, a US startup, provides a solution for embedding almost anything in videos — PDF or PPT files, audio and video files, hotspots and social icons. Veeple also has an auto-detection technology for tagged objects and has recently launched a free API for integration with third-party Flash Players and CMSs.

Emi Gal, CEO and founder of Brainient (pictured), says the main difference between LayeredBrain and its competitors is how the money is made. LayeredBrain provides integration with affiliate marketing links, besides offering the interactivity tools, which leads to a revenue stream three times higher than with regular video advertising, he says. Since this subject came up, I was curious to know just how much money a regular video can make. 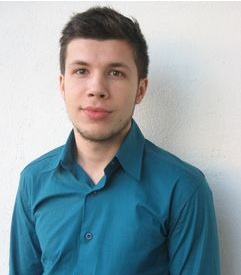 Gal had some dazzling calculations in store: “If you run pre-rolls on your videos, charge a $30 CPM and get half-a-view per pre-roll, per video, that means you’re making on average 1.5 cents per video view. If you attach an affiliate link on top of that video, for an average purchase of $60, a 10% commission and a 0.5% conversion rate, it could bring you 3 more cents per video view. To sum up, we can triple a publisher’s revenue just by adding contextual affiliate links on top of the video.” 4.5 cents per video might not seem much, but if your video reaches 100,000 views, that’s $4,500.

For now, we’ll have to take Gal’s word for it, but for the next few months, he plans on getting enough traction to put together some case studies to prove LayeredBrain generates more money for publishers.

Launched just two months ago, LayeredBrain has already raised 100,000 euros from Seedmoney and Seedcamp and has a third round of investment in the pipeline. Brainient, the company developing Layered Brain, is also behind another video product, Veevid — an open source video management platform. Its R&D and technical support teams are based in Bucharest, and its sales and marketing teams are in London.