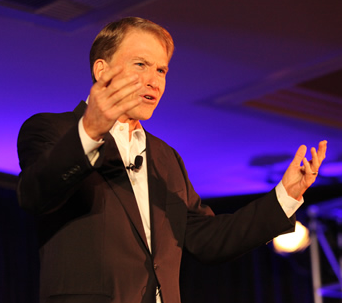 Steve Westly, former California state controller and now founder of the venture firm Westly Group, says he got interested in the Smart Grid and cleantech in order to save the world and make massive amounts of money in the process.

During a talk designed to counter Vinod Khosla’s Smart Grid skepticism in the session previous at GreenBeat 2009, he recalled putting solar panels up on president Jimmy Carter’s White House, and his heartbreak when president Ronald Reagan tore them down. Westly appears to be about emotional investment as much as financial investment. Now what is he actually saying about it all?

For starters, he dismisses the Flores lawsuit against PG&E — which claims that the installation of smart meters has hiked energy rates — as growing pains.

“Any startup technology is going to have it’s failures,” he said. “When the internal combustion engine first came out people thought it would never survive because it scared the horses, and how would they ever get around that?  A few years later, they drove cars and horses weren’t even in the picture.”

He makes a fair point: early failures and shortcomings don’t necessarily condemn anything in the long term.

When asked about the development of Smart Grid standards, Westly readily admits that the government “is going to mess the whole thing up,” but he’s glad for government involvement anyway — the incentives and grants are going to kick-start the transition to more intelligent utilities, he says.

He also stressed that there is a lot of money to be made: again and again the theme of profitability came up. He is, after all, a venture capitalist. “Bring your business plans,” he told the audience. So far, Westly has been enthusiastic about grid-related investments, choosing to back intelligent utilities vendor Eka Systems.

However, Westly says startups still need a clear idea of when their ideas will reach profitability, or the meetings he takes will be short. His smile manages to say “I’m joking around with you” and “I’m serious about that one, bud” at the same time. It’s business, even if this the Smart Grid has acquired a humanitarian and environmentalist halo.

Westly also predicts winners on the appliance side, which many in the industry have prematurely written off. After all, if people are given smarter refrigerators by their utility company, who will buy one from a retail store or brands like General Electric or Whirlpool? Westly responded to this point, saying, “You can get a free phone from AT&T too, but people will still buy the iPhone. When you see a really cool gadget, lots of people will want to buy it.”

He’s also expecting lots of apps to operate on the Smart Grid, with an open-source set of protocols and languages controlling it all. It’s as if he’s picturing it (as many are) as an extension of the internet — with the same players, money and challenges.

Asked what success in the Smart Grid will look like, Westly said, “The standard definition of success is how many of these things are deployed. We’re at 8 million, I think that number is going to quadruple in the next few years. But what I really want to see is the U.S., California and the Silicon Valley leading this whole thing. I want somebody like any of us, maybe somebody in this room, to think of the next big idea, to invent the next iPhone.”

Presumably, he also wants that person to come to him for an investment.