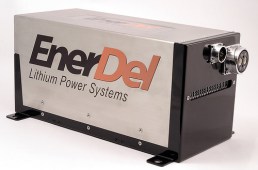 The success of a cleaner, more efficient super grid hinges on the development of large-capacity storage. That’s a message we heard repeatedly at our GreenBeat 2009 event earlier this month, from investors Vinod Khosla and Peter Wagner, as well as from Al Gore. Now EnerDel, a subsidiary of Ener1 known for making batteries for hybrid electric cars, says it will take a stab at the problem.

The U.S. Department of Energy and utility Portland General Electric have tapped EnerDel to use its lithium-ion battery designs to store energy in five 1-megawatt power systems that serve 400 homes surrounding Portland, Ore. during peak energy periods. The DOE will chip in about $90 million toward the $178 million project, which aims to take the edge off peak demand and provide reliable backup energy when solar and wind sources cut out.

Eventually, the company plans to install 15 of these smaller storage systems and test them for the next three years.

Based in Indianapolis, the company believes that storage will become even more of an issue once electric and plug-in hybrid vehicles roll into showrooms over the next two years. If commuters come home every day and plug in their cars as predicted, peak demand will not only hike prices considerably, it could also lead to massive energy waste and power failures (which are expensive for utilities to locate and fix).

EnerDel might have a leg up as an automotive battery maker. Considering its supply deals with Nissan, EV maker Th!nk, and others, it seems to understand the market potential, including how and when average consumers will use and charge their vehicles.

There has been a lot of discussion lately about turning EV and hybrid batteries into bi-directional fuel cells. What this means is that the grid could potentially draw energy out of car batteries when they are out of use — like during peak periods when extra energy is in dire need to lower costs and maintain grid stability. Energy would then flow back into the batteries overnight, during the wee hours of the morning, for example, when energy is at its cheapest.

Even if this isn’t going to be EnerDel’s core approach, the batteries it is making for cars still have the chemistry and technology that could be adapted for larger-scale grid storage applications.

The public company has definitely benefited from the $118.5 million grant it received in August from the Department of Energy under the Advanced Battery Manufacturing Initiative. It also used some of that money to buy eight electric vehicle power cycling and test systems, it said today.

Its competitors like A123Systems and Johnson Controls-Saft haven’t been making too much noise about getting in the smart grid — a potentially huge business for battery makers. It looks like EnerDel may have just scored one of the earliest footholds.