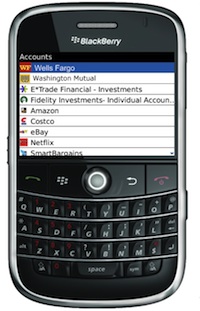 Pageonce, a mobile “personal assistant” that helps users manage all their online accounts with a single smartphone application, has raised $6.5 million in its first round of institutional funding. It also announced that it now has 1 million registered users in the United States.

I talked to Jim Scheinman, the Palo Alto, Calif. company’s new chief operating officer, about  the news. Scheinman was the first employee at Bebo, the social networking company acquired by AOL for $850 million, and he was also an early investor and advisor at Pageonce.

When chief executive Guy Goldstein first approached him, Scheinman said he liked the company but hated the idea. That’s because Pageonce was focused at the time on building its website, and Scheinman said similar companies had failed. But the Pageonce executives realized that they were seeing serious usage on smartphones (starting with the iPhone), so they shifted their efforts to mobile, where they’ve been more successful — not only  have they hit 1 million registered users, but the Pageonce Personal Assistant app is currently the number one productivity app in both the BlackBerry and Android stores, and has been in the top 20 in the iPhone store all year.

In the coming year, Scheinman said Pageonce will be rolling out more apps — Personal Assistant, where you can bring together financial accounts, social networking, email, and more, will always be the flagship product, but it’s easier for users to wrap their minds around more focused apps, like the Mobile Minute Tracker for monitoring your cell phone usage, and a new Trip Tracker for managing flight and hotel information. The idea is to cross-promote between apps, and eventually feed users from the focused apps into the general Personal Assistant.

Pageonce is taking on different competitors as it enters different fields — the Personal Assistant is similar to Mint.com, for example, but it covers more than just financial accounts. The company makes money by offering advertising in its free app, as well as charging for a premium version. Scheinman said that the company will also start using the data it has about users to deliver customized promotions and offers.

The new round was led by Pitango Venture Capital. Pageonce has now raised $10 million in funding.