Event management service Eventbrite has released new reporting, analytics and insight tools for its event organizers. The tools let event organizers track ticket (in real time) purchasing trend, such as where and when tickets are being bought, attendee demographics, discount code usage, sales by ticket type, and attendance/no show trends. This is in addition to offering Google Analytics code that event organizers can add to their ticketing pages.

CEO Kevin Hartz explains that while Google Analytics focuses on site performance, such as page views, EventBrite’s tools allow for tracking of sales and trends in the data, allowing clients to better target onsite advertising based on peak sales times, for example.

Since several of Eventbrite’s competitors already offer data tracking features, this addition is an important one for the company.

Eventbrite has been used for 200,000 events to date with over $100M in tickets sold via the site. The size of events using the system vary from those with as few as 5 attendees to those with 5,000-10,000. The average event size is 35. In addition to annual conferences, such as TechCrunch 50, it’s powering 80% of the New Years Eve events in San Francisco this year as well as Playboy Mansion’s Toys for Tots fundraiser.

Eventbrite does not charge for free events but charges $0.99 per ticket plus 2.5% of the ticket price for paid events. Event Intelligence is included in the existing pricing model and is available to all EventBrite customers. Eventbrite does not require event organizers to sign a contract, allowing them to leave at any time, said Hartz. 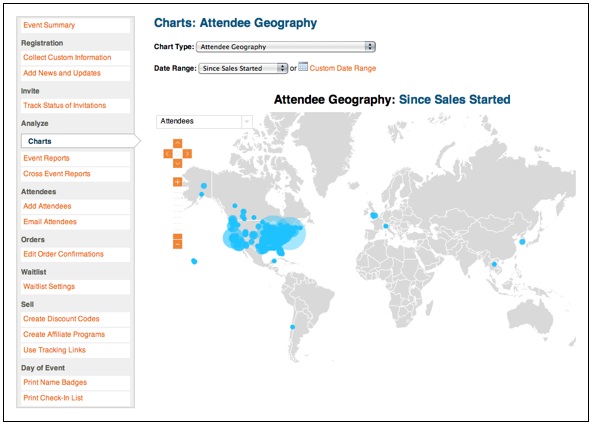 Competitors include Ticketmaster, which focuses on larger venues, EventsBot, which charges 2% per ticket and does not have ticket sales tracking, Amiando, which also allows for tracking of tickets sold and charges 1 Euro plus 6% of the ticket price, RegOnline, which also offers data tracking but charges 4.95% per transaction, TicketLeap, which also offers ticket sales tracking and charges $0.97 per ticket, a 3.99% credit card fee, and $1 extra for tickets over $10, Acteva, which charges $1.25 per order plus $1 per ticket and also allows for custom report creation, and Eventioz, which charges 5.99% per transaction.