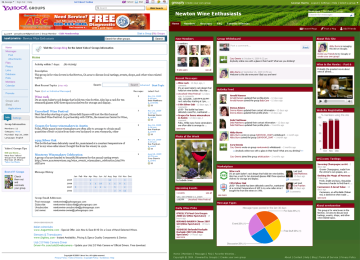 Internet discussion groups have been around for decades. Startup Grouply offers a wrapper for Yahoo Groups and Google Groups that makes them more comparable to Facebook and Twitter, while not changing the underlying technical architecture. (See these before-and-after screenshots of a Yahoo Group processed through Grouply.)

Grouply also makes it easy for group administrators to make a small amount of money from a group, by optionally serving ads to group users and/or collecting payments from them.

Yahoo Groups currently claims 120 million users belong to one or more of its 10 million groups. Yet “when you go to Yahoo Groups, it’s like a time capsule,” Grouply CEO Mark Robins said in a phone interview. “You’re stepping back fifteen years” into Yahoo’s page designs.

Groups have at least three advantages over social networks:

Regarding that last item, Robins recently blogged about how group discussions compare to social network chatter:

“The BASKETBALL group on Facebook has over 5,000 members. About 10 posts per month appear in the discussion forums there. The third most popular discussion is titled “I love basketball” and includes the postings “I love it too, basketball rocks!!!” and “basketball is the best sport ever.” Compare this to Coaching Hoops, a typical basketball-related group on Yahoo! Groups. The 500 members of Coaching Hoops include practicing high school and college coaches, and the group generates about 250 posts a month on topics such as shooting techniques and the most effective way to provide feedback to players.”

Grouply adds these features on top of existing groups:

Grouply has created two videos at Screencast.com. One shows a basic Yahoo Group makover, and the other demos customizations.

To promote its services, Grouply has chosen Eric Snyder, who maintains the FullCircles Ottawa group on Yahoo, on which members exchange used goods rather than throwing them out. In a prepared statement, Snyder said, “Grouply has enabled me to break free from the constraints of Yahoo! Groups. I embedded educational videos in my site on Grouply, created over 20 pages of content related to recycling and the environment, and applied a new grassroots theme and color scheme that visually communicates our objectives.”

So far, though, the company isn’t sharing numbers on how much money anyone is making. Snyder doesn’t run ads on FullCircles.

What’s ironic is that Grouply also charges customers to NOT see ads. The company currently makes its revenue by selling premium services atop its free core product. For $20 a month, Grouply will remove its own promotional links from a group page. For another $20 monthly, it’ll stop serving all ads to the page. (There are other services, too, such as a personalized Internet domain name instead of ____.grouply.com, for $5 a month.)

Grouply is based in Redwood City, Calif. It was founded in 2006 and has 6 employees. The company has raised a total of $3.3 million in two rounds, with O’Reilly AlphaTech Ventures, SoftTech VC and LinkedIn founder Reid Hoffman among the investors.

Ning is sometimes cited as a competitor, but Ning is for building social neworks, not groups. Another startup, Grou.ps, is much more like Grouply. Robins says he considers Yahoo Groups and Facebook his serious competition, because these sites could add features that persuade their users not to switch to Grouply.