Livemocha, the fast-growing site that lets people learn other languages for free — by matching them up with other native speakers online — has raised $8 million more in a second round of funding.

The Bellevue, Washington company is shaking up what its investors say is a $83 billion market worldwide. It’s the first of a bunch of new companies that have emerged recently to teach people foreign languages online, including Myngle, Italki and Yappr. Livemocha appears to be in the leading position, according to Google Trends (see chart below). The company says it has 4.8 million registered members, from over 200 countries.

For too long, languages have been taught from text books, and with teachers in a one-to-many format in the classroom. This can be alienating for students who can’t keep up or for whatever reason don’t like their teacher. Livemocha, which launched at the DEMO conference in 2007 (VentureBeat co-produces DEMO), was particularly innovative because it pairs individuals who can swap lessons in their native languages. So, for example, if you want to learn Spanish, it will locate a person who speaks Spanish who is wanting to learn English.

That way, you both have an incentive to help each other, you immerse yourselves in each other’s languages, and are helped along by online written coursework to point the way. And by crowd-sourcing people most aligned to help you, the service also significantly reduces the cost of lessons, because both sides have an interest in participating. The basic service is free. Only when you want to download your coursework to take it with you, or if you want to get your speaking skills reviewed by qualified tutors, do you need to upgrade to a paid version.

See the screenshot below for an example of how it offers you “friends” and “suggested language partners.”

Amy Errett, partner at Maveron, the venture capital firm that led the company’s first round of investment, said her firm noticed Livemocha when it launched at DEMO, when it had just 20,000 users of its beta version. The firm saw an opportunity for the company to create a “network effect,” where it mobilizes enough users to join its platform that it can offer to pair any one user with the perfect partner for their level. The firm invested $6 million three months after seeing Livemocha launch, Errett said. More recently, Errett introduced the company to the partners at August Capital, which led this latest round of $8 million, she said.

The company is not yet profitable, but says it’s focused on growth and that it plans to be profitable with help from this latest round.

Another competitor is Rosetta Stone, a 17-year-old company that recently went public, and until recently was focused on selling DVDs for language learning. The company has started selling online language services very similar to Livemocha’s, but priced at $999. That’s a high enough price to take it out of the reach of many consumers. 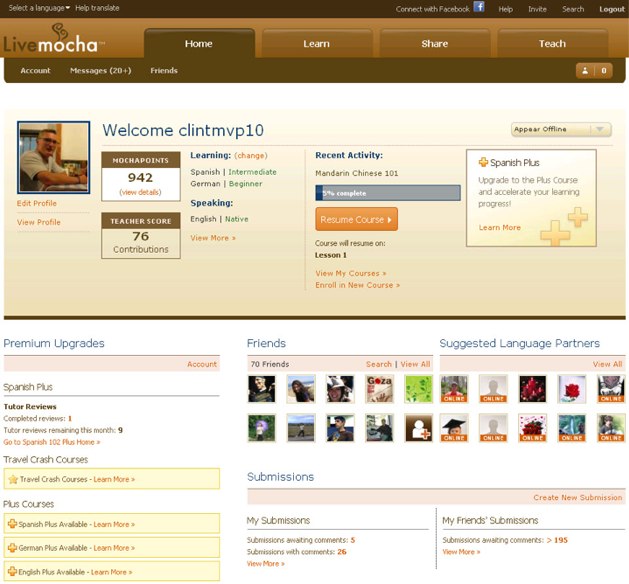