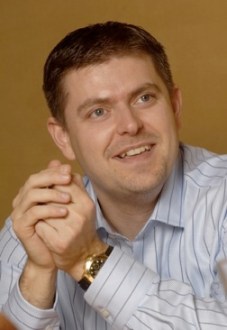 Ilja Laurs is the founder and CEO of GetJar, the multi-platform app retailer with strong claims to being second only to Apple in number of downloads. Laurs runs GetJar from offices in the UK, Silicon Valley, and his native Lithuania. I spoke to him recently about where he sees the next opportunities in mobile apps.

VentureBeat: Earlier this year in an interview with the BBC, you stated that mobile apps would become “as big as the internet.” Does mobile need to enter a default platform phase, similar to the web browser and HTML, in order for this to occur? How do you see your prediction coming to pass?

Ilja Laurs: Apps are always going to be part of the internet, and the part cannot be bigger than the whole. I believe that if you measure internet usage by time spent, mindshare, or revenue, mobile apps will be bigger, but indivisible from the desktop internet. Of course, there is a necessity to build a uniform standard, because otherwise it’s really difficult to build any larger-scale service. Looking back at the internet, think of how long it took the internet to take the shape it has now. I think ten years is a very realistic assumption. But at the end of the day, mobile applications will be bigger than today’s internet.

Just to illustrate with a little research: we did an extensive poll of more than 10,000 consumers a couple of months ago, and one of the questions was to find out how much time they spend on mobile compared to how much time they spend on the desktop internet. Seventy percent said they spent more time actively engaged with their phones, doing status updates, playing games, and otherwise using mobile applications, than they do on the desktop internet. That’s already true today.

VB: Was that a poll of smart phone users?

The problem is not really about feature phones and smart phones. The problem is how to get started. Typically your iPhone or BlackBerry user is on an unlimited data plan, which is typically not the case with a feature phone. In the majority of cases it’s very difficult to configure the phone, so the entry barrier into apps is way more difficult. But once you’re there, it’s the same.

VB: Don’t you think data plans will have to evolve as well, into a model that is like broadband internet today?

IL: Absolutely. And you know, the biggest problem in today’s data plan is that the cost is very unclear to the consumer. I’ve never come across a truly unlimited plan, and in most cases, especially in Europe, the pricing is completely unclear to the consumer. You have no clue what your phone bill is going to look like. I don’t think the consumer has developed a sense for how much time they need to spend and how much they’re going to pay for the service. Similarly, if it’s by the megabyte, or even on an unlimited plan, if you cannot consume more than three gigabytes – this means nothing. What is a gigabyte to the consumer? How many emails, how many clicks, how many songs?

VB: It’s similar to the early days of internet, where you were charged by the minute.

IL: You are totally right, with the exception that if you are measuring by minutes, you have some sense for how long you spend. Your time sense is built in, whereas you don’t have a built-in “data sense.” I think that with mobile it’s even more difficult. Unless consumers get a really simple data plan with really simple pricing, they have to be very careful. There’s a perception that every single click is going to cost money.

VB: Is growth in the mobile app market dependent on the adoption of smart phones? Is there a place in the future for the “dumb” phone?

Third, when we measure the reasons behind consumers using apps, we find there are only three things that really matter. First is an unlimited data plan. If you have an unlimited data plan, you’re consuming apps, no matter the device. Another big thing is the speed with which you can start using apps. If it’s really easy and fast, you’re using apps. If it’s slow, you may never use apps. If you could get a big button that said “Download Apps,” the user will be into apps immediately. And the third thing you need in order to enjoy many apps is a large color screen. These are the only things that matter.

VB: What about price point?

IL: The most popular apps, like the app for Facebook, are free to download. Sure, if games cost less people will buy more games, but the price of apps turns out to be a relatively small consideration.

We also studied whether the touch screen matters. We know that it’s easier on a touch screen to buy apps and interact with them, whereas on a non-touch screen you have to scroll, press buttons, click OK and so on and it’s much more difficult. But we found that touch screens only make the consumer slightly more likely to consume apps.

But it would be fair to summarize that in three years the question will simply dissolve.

VB: What kinds of mobile apps will be ubiquitous when apps are as big as the internet? What will be the equivalent of Google and Facebook? Will we simply move everything to a new form factor, or will mobile continue to have a separate niche?

IL: My answer might seem kind of boring, but it is based on the observation that apps steal mindshare from the internet. So when you’re talking about Facebook, today many consumers use Facebook apps [on mobile devices] much more than on the desktop, because it’s always there on the go. I can’t be specific about Facebook’s numbers, because that would disclose some sensitive information, but when you’re talking about the category of social apps in general, our average consumer launches them eight times a day and spends five to ten minutes each time. So already today, Facebook apps have a greater mindshare than the Facebook website.

So on the question of what will be the popular apps of the future, the boring answer is that these will be already popular internet services. Social services like Facebook and Twitter will continue to be dominant. Already today, it is a fact that 40% of mobile data traffic is generated by social networks.

Social networks, gaming, messaging, browsing, and dating will be the top five categories that will dominate the market. We’ll have a long tail of other services as well.

VB: Isn’t it also true, though, that location is a differentiator, and that GPS onboard in phones has led to lots of phone-specific development? I’m thinking of any number of things, from Foursquare and Gowalla to services that remind you where you’re parked or send your GPS location to your friends. Won’t location drive the mobile experience and make it a different experience than today’s desktop?

IL: Location is an interesting addition to the existing model, so I think that all these features are going to be hot. Certainly there is a use case for navigation services. I think that there will be features based on the capabilities that phones have, but I don’t think any of these services will surpass what are already proven to be the most popular services on the internet. Maybe a totally new phenomenon will arise in the next ten years, but these phenomena are completely impossible to predict. If I could predict them I’d be doing something else.

Looking at the next three to five years, I certainly do not believe that there’s going to be a new market-dominant service based on purely mobile features. The dominant consumption will come from services that, fundamentally, we already know. The spectrum of services on the internet already reflects the spectrum of general consumer need.

VB: You’ve said that 90% of app developers will be unable to turn app development into a viable business. Can you offer any predictions about who are top contenders, and who among the more prominent developers is in trouble? Can the app market sustain 100,000 apps?

IL: First, I would like to qualify the 90% statement. This statement was made in July and reflected market conditions at that time. The ecosystem at the time was not large enough to sustain many developers.

I think that in ten years from now there’s going to be a really huge market. I often use a comparison to music because I think it works really well. For the iPhone user, the classic user who consumes applications also consumes music. On average today, iPhone users spend similar amounts of money and time on apps and music.

I think that in ten years the app economy will be similar in size to today’s music economy, which is huge. There are tens of thousands of markets and millions of songs. When you are talking about apps, the amount of effort put into producing an app is also comparable to the amount of effort put into producing a song. Even the development is similar: you’re talking about guys in their garages starting a band, or guys in their garages developing apps.

In today’s economy, based primarily on the iPhone, there’s no way that 100,000 apps will get a good return on investment. Maybe only 1,000 can turn this into a big business. But the economy generated by app development is going to grow exponentially, so in ten years, tens of thousands of developers will make a significant living.

VB: Finally, you’ve said that next year will be the “year of the handset.” Can you offer more detail about what you envision?

IL: I can’t talk about specific devices, but the devices emerging from major phone makers will be outstanding. It’s not just evolution, it’s revolution. The answer as to why this will happen in 2010 is very simple. Three years ago, every single phone maker was blown away by the iPhone, and everyone started trying to copy it. In the last three years every major industry player has been working on phone technology, and they’ve been putting in comparable investments to what Apple spent on the iPhone, because they knew if they didn’t they would lose the market. So 2010 is when the consumer is going to see the result of this enormous push in technology development. Every phone maker will have an equivalent of the iPhone launch.

VB: Will these new devices be significantly different from the iPhone?

IL: In general they will have a more pleasing touch screen and a better user interface, and they will try to beat the iPhone on technical factors such as screen resolution and battery life. From a consumer standpoint, it will be similar to the conversion from black and white to color phones.

[Editor’s Note: This interview originally appeared Sunday, but coincidentally appeared right next to a post sponsored by GetJar. Concerned that it would appear to readers to be a quid pro quo arrangement, we immediately pulled the story. Going forward, we’ll make our policy on sponsored posts very clear to avoid any appearance of a conflict of interests. Here, for the record, is our policy on sponsored posts: