Apple app downloads for December will be 51% higher than November’s totals. The reason: A huge new group of customers who received an iPhone or iPod Touch as a gift.

Here are the high points of Flurry’s December report: 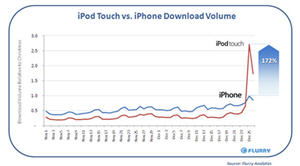 Total iPod Touch downloads — not just the new ones, but all past and present models — jumped by over 10x on Christmas Day. Flurry thinks that iTunes gift card giving may have driven downloads observed coming from older iPod Touch models.

iPod Touch surpasses iPhone on apps. App downloads on the new third generation  iPod Touch shot past iPhone downloads for the first time, beating them nearly three times over. But the safe bet is this was due to Christmas giftees playing with their iPod Touch a lot. The trend probably won’t continue.

(One more thing: I avoid using the report’s insidery jargon “iPod Touch 3G” to refer to the new third-generation models. There are already an iPhone 3G and iPhone 3G S. For these products, 3G refers to the type of mobile phone networks to which they can connect. The term “iPod Touch 3G” understandably confuses some readers into thinking the Touch has 3G wireless capability, which it doesn’t.)