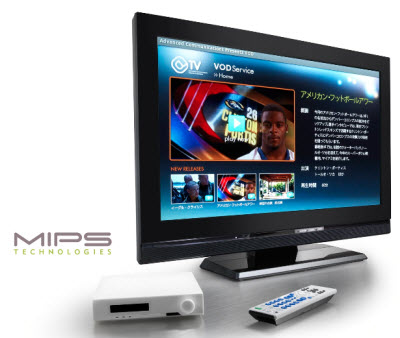 MIPS Technologies is betting big that Google’s Android operating system will become popular not only in cell phones, but in digital home devices as well.

The Mountain View, Calif.-based company designs processors that can be used as components within chips designed by MIPS’ licensees for use in home electronics. While marrying Android to MIPS isn’t necessarily sexy, it’s a critical step in Google’s campaign to widen the market for Android. And it’s an important for MIPS to help fend off rivals such as Intel and ARM.

MIPS could use a shot in the arm itself. The company is slightly profitable now. And MIPS’ chief executive John Bourgoin recently decided to retire and chairman Anthony Holbrook stepped in as acting chief executive.

The endorsement of chip design firm MIPS is important for Google, since there are five to ten MIPS-based chips in every home today in devices such as Linksys routers, Sony PlayStation Portables, set-top boxes, DVD players, and digital TVs. When it comes to home entertainment, MIPS is one of the invisible technologies that makes it happen.

Now that these digital home devices are becoming networked and web-enabled, they need a modern operating system, said Kevin Kitagawa, director of strategic marketing at MIPS. “Our focus is to enable the connected digital home, and in the last six months, Android has become an important platform,” he said.

MIPS is also announcing that Adobe’s Flash technology will be optimized for MIPS processors so it will run easily on MIPS-based devices. Flash is commonly used in games and web pages, so it is essential to the proper display of web pages on TVs. So far, MIPS developers have downloaded 2,000 copies of the source code for Android running on MIPS hardware. In December, MIPS announced that Tensilica, would offer design components with MIPs designs for Android-based digital home devices. Other key partners on Android-based systems are Chips & Media, Discretix, ViXS Systems, MStar Semiconductor and Vivante.

Devices running Android on MIPS processors are expected to debut in trials in the second half of 2010, while volume shipments are expected to happen in 2011. Once that happens, we’ll all enjoy the benefits of having fast and responsive web apps on our digital home devices, from TVs to Blu-ray players. These devices will be able to run the coolest 3-D graphics and video. Market researcher Parks Associates estimates that 200 million set-top boxes with web-based personal TV services will ship in 2013.