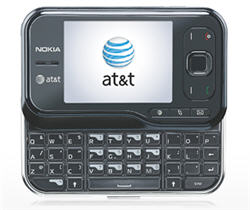 Pity the cellphone supergiant Nokia. The company has conquered the world at large, selling roughly as many phones as its four largest competitors combined.

But Nokia can’t get Americans to buy its phones. Nokia is known to status-conscious Yankees as the maker of those cheap phones you get for free. The days of Keanu Reeves’ snap-open 8110i and the metal-plated 8550 lust-phone are ten years gone. Could you identify Nokia’s Surge, Mural, or N97 models as easily as you do a Droid?

Also, he’s got an app store. Ovi, which launched last fall, is only today  available to AT&T users. From CNet’s report:

Consumers using Nokia devices such as the E71x, the Surge, the Mural, the 6650, the 6555, and the 6350 are now able to download free and paid content from the Ovi Store. Paid content will be billed directly to their AT&T bill. Nokia said more devices soon coming to AT&T’s network will be able to access the Ovi Store.

The twist in Nokia’s business model is what’s called “carrier billing,” where app purchases show up on your phone bill, rather than being charged directly to a credit card via iTunes for iPhones, or Google Checkout for the Droid and Nexus One.

Carrier billing has been popular in Europe. They’ve had soda machines that charge to your phone for more since the 90s. But Americans have proven reluctant to trust their phone company with any sort of automatic billing.

Wireless carriers will be tracking Ovi’s success or failure closely, to see if they can add app billing to their services. The safe bet is that business will be slow. But Ojanpera loves to remind doubters that not too long ago, Nokia’s primary business was car tires. There were lots of laughs when the company diversified into newfangled mobile phones.

AT&T also announced this news at its developer conference in Las Vegas this morning.