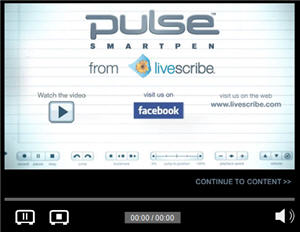 YuMe, a well-funded company founded in 2004 in San Francisco, combines what co-founder Jayant Kadambi described on a phone call as “a technology platform with a media sales team on top of it,” in the style of the original DoubleClick ad network of the 1990s. YuMe will not only provide the technology to serve video ads to your site, it’ll actually sell the ads for you, and give you a cut of the proceeds. “Instead of going to publishers and saying, ‘pay me $10,000 up front to use my technology,'” Kadambi said, “we can go in there and start writing checks to them.”

Today, YuMe launched a new video ad feature the company calls Triple Play. Think about how at the end of a YouTube video, you’re given the option to do several different things — play the video, play another video, share the video. Triple Play adds that sort of functionality to the end of a pre-roll ad that runs before the main video in an embedded Flash player. See the demo Triple Play ad in YuMe’s ad gallery. It begins with a 12-second ad for the Pulse Smartpen. At the end of the ad, there’s an onscreen menu with three options: Watch a full-length video about the Pulse, go to Pulse’s Facebook page, or go to Pulse’s website.

Oh yeah: There’s also a link at the bottom: “Continue to Content.”

I’m sure many people who find themselves agitated by advertisements — I’m one of them — will seethe in silence when instead of proceeding to the video they wanted to watch, the ad stops and puts up a menu of more calls to action. But it’s also a pet frustration of mine that when I do find an ad interesting, it’s suddenly over and I can’t get it back. Triple Play could help — it could let me play the ad again, or pop open a new tab with the product’s home page, or tweet me a link to look at later. “Basically anything you can code into a Flash file,” Kadambi said. The most obvious call to action might be to get a viewer’s ZIP code or email address for more targeted information.

Will this make YuMe more money? It seems likely. Video ad rates can be as high as $80 for 1,000 served ads, or as low as a few cents for a thousand. Triple Play gets to the point that what advertisers really want from online viewers is for them to “lean in” and interact with the ad, rather than leaning back and watching it go by. Triple Play pretty much forces you to engage.

YuMe, which has 40 employees in Redwood City and another 40 in India, is backed by Khosla Ventures, Accel Partners, BV Capital and DAG Ventures. The company has raised $21 million in three rounds, most recently a $5 investment in September 2009.