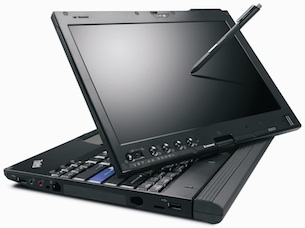 Lenovo recently released its latest tablet PC — the Thinkpad X201 — and with it came strong words against the iPad and the recent wave of similar “slate” tablet devices. As reported by CNET, Lenovo said that it’s not developing a slate device because it’s customers simply don’t want it.

Keyboards have long been a selling point for Lenovo’s computers (something it inherited from when IBM was still making Thinkpads).  According to the company,  it was the lack of keyboards that turned its customers off of slate tablets. Lenovo’s Thinkpad line is particularly popular among business users, and they likely weighed in heavily when the company was looking for feedback on tablets.

The X201 is a convertible tablet that can be switched from functioning as a typical laptop, to a screen-only tablet, by rotating the device’s screen. Before the hype that led up to the iPad (and inadvertently created the slate tablet segment), convertible devices like the X201 were what tech geeks thought of whenever they talked about tablet computing. While they found uses in certain scenarios (the healthcare industry jumped on Microsoft’s “Tablet PC” platform way back in 2003), convertible tablets were either too under-powered, or too expensive, to become mainstream hits.

Convertible tablet PCs also run full versions of Windows — unlike the stripped down iPhone OS that the iPad is running, or Google’s Android OS (which other tablet manufacturers are considering). This can be both good and bad. The good: Business users don’t have to learn anything new about the OS, and it can also run all of the software they’re familiar with. The bad: It forces convertible tablets to operate with standard computing paradigms — basically, its operating system simply isn’t optimized for the workflow of a tablet.

I don’t think Lenovo is going to be able to stay out of the slate tablet market for too long. The X201 retails for $1200 — more than twice as much as the $500 low-end iPad. Android tablets are aiming for an even lower price range. Eventually, it will make sense for Lenovo to put out its own slate, no matter what some of its hardcore customers think. And as Stan mentions below in the comments, Lenovo is pretty much there already with its IdeaPad U1 hybrid smartbook.

For now, Lenovo customers get the best of both worlds with the X201. It runs Intel’s new low voltage Core i7 CPU, and comes standard with 4GB of RAM — so it’s definitely powerful. And unlike past convertible tablets, the X201 features a capacitive touch screen — which makes it very finger friendly, and ready to compete with multi-touch slate tablets.