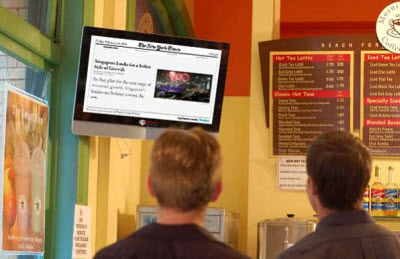 The New York Times and RMG Networks are launching a venture where the newspaper’s web site will appear on digital displays in coffee shops and other locations in five major cities.

The NYTimes.com web site will appear on more than 800 screens in business district cafes and eateries in New York, Los Angeles, Chicago, Boston and San Francisco. That’s a subset of more than 60,000 screens that RMG (formerly known as Danoo) has nationwide.

People standing in line waiting to get their coffee can look at the screens to see headlines and a sentence or two of the stories, as well as photos and some videos too.

Viewers can go to www.NYT2day.com on their mobile devices to view the same articles displayed on the screens. Gary McGuire, chief executive of RMG, said that the company’s strategy is to offer the best video entertainment and information it can to engage people while they’re on the run. That’s increasingly necessary in an age when viewers aren’t sitting still in front of their TVs to watch 30-second commercials anymore.

On a monthly basis, the New York Times can reach six million people on the run through the 800 locations, McGuire said. Murray Gaylord, vice president of marketing at NYTimes.com, said that the screens are a way to extend the company’s brand to business professionals in key markets.

RMG pipes in the pages to the screens via broadband Internet connections. It can send messages and coupons to the phones of the people standing in line, as long as they turn their Bluetooth radios to reception mode. Through its 60,000 screens, RMG Networks says it can reach 25 million people a month. RMG’s investors include National CineMedia and Kleiner Perkins.