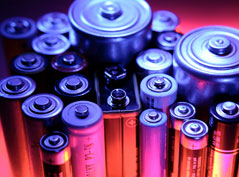 Contour Energy Systems, formerly known as CFX Battery, emerged from stealth mode today with a lineup of rechargeable, energy-dense batteries that could change the way we power portable electronics.

The Azusa, Calif. company’s secret sauce is its chemistry. Relying on new fluorine-based cells — as opposed to the standard lead, lithium or cobalt — its products are said to store more energy for longer, and under more extreme conditions, than competing systems. It plans to sell and license its intellectual property to drive revenue — and it’s got a nice head start with 60 patented and patent-pending features.

The term “portable power” calls to mind laptops and batteries — small consumer electronics that require batteries with long, reliable lifespans. But Contour isn’t relegating its technology to the usual suspects. It lists transportation, defense and industrial verticals as potential targets as well. Could its lithium carbon fluoride batteries give the lithium-ion packs powering today’s EVs a run for their money? Perhaps.

Right now, the venture-backed startup is producing batteries as coin cells, typical cylinders and thin-film. Among the uses listed for these products are tire-pressure monitoring systems, internal and external medical defibrillators, military radios, water and gas meters, and pacemakers. But the company hasn’t made any mention of grid-scale storage, the current goal of other major advanced battery companies like A123Systems and Panasonic.

Contour claims that, because its products will have higher energy densities than others, they will actually be cheaper than many rival systems, which won’t last as long and require more maintenance.

Proving the company’s technology, NASA has already extended it two technology transfer contracts. Contour will be building high-energy batteries for manned spacecrafts. They will be used to power space vehicles as well as electronics used off-world, like rovers. Again, the energy density will be a boon. Reducing the number of batteries needed also lightens the load.

The second contract with NASA has Contour working on developing new high-performance electrodes capable of handling even higher energy applications for the administration.

Contour, a joint venture between a research team out of the California Institute of Technology and France’s National Center for Scientific Research, has raised close to $20 million in capital from CMEA Capital, Harris & Harris Group, Schlumberger and U.S. Venture Partners. Its leadership team hails from companies like Duracell, Energizer, ConocoPhillips, Hewlett-Packard and Ultralife.