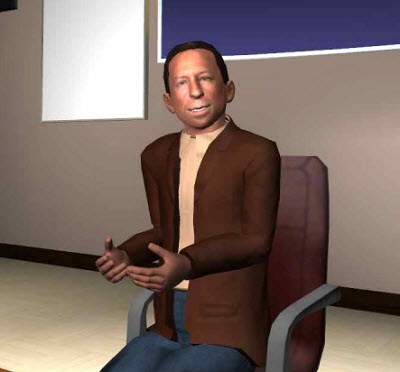 VenueGen is one of 65 companies chosen by VentureBeat to launch at the DEMO Spring 2010 event taking place this week. These companies do pay a fee to present, but our coverage of them remains objective.

Virtual-meeting startup VenueGen is announcing today a virtual meeting platform that is both visually appealing and easy to use. To date, most meeting platforms have been neither.

It’s a lot more than Cisco’s WebEx meeting platform, and a lot less than Linden Labs’ Second Life virtual world. Jeff Crown, president of the company in Research Triangle Park, N.C., says it strikes a balance between business utility and an entertaining platform.

It’s pretty simple. You don’t need a webcam and can simply log into a meeting via a browser. There is no download required. Signing up takes a matter of minutes. You create a 3D virtual character, or avatar, simply by uploading a picture. The software maps the image to a 3D model so that the virtual character really looks like you. 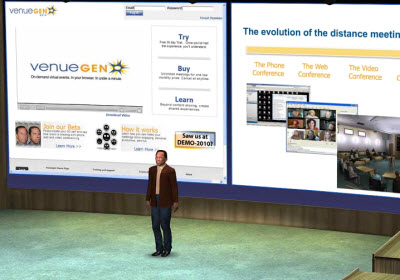 You can also select the level of gesturing that you like to use when you’re talking (you can be pretty still, or you can flap your arms around a lot). So the lip, facial and body movements can generally mimic the way you behave. Then you can invite someone into a meeting in a particular kind of space, such as a sailboat, a classroom, an office conference room, a lecture hall or an amphitheater. The person joins you in the conference room and you start talking via Internet voice technology from Vivox (another company presenting at DEMO). It takes a matter of minutes to set up.

When you’re in a meeting, you can change your point of view. You can look left or right by using a panning control. 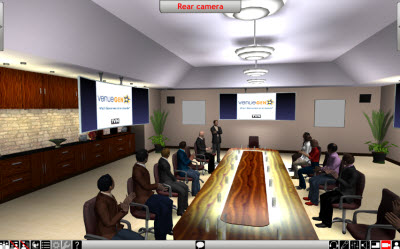 Rival solutions are all over the map. There is Cisco’s WebEx  and GoTo Meeting, which allow meetings where you can talk and share slides. Then there are the more elaborate virtual worlds such as Second Life, where companies such as IBM hold everything from training sessions to sales conferences. There are also virtual events companies such as inXpo, Unisfair and On24. Forterra Systems, another company in that space, recently shut down.

Whoever gets this right could score big. Research firm Research 2.0 estimates the 3D avatar market for business will grow to $8 billion in annual revenues in 2014. That doesn’t include the training and collaboration markets.

Crown said nobody has really gotten the combination right. Some aren’t visually appealing, and some go overboard on visual effects at the expense of simplicity and usability. VenueGen focuses on being both engaging and immersive. The avatars have faces; the sound comes from different directions; you can share content. During the meetings, you can use a private browser for cruising the web (no one will know that you’re really using Facebook at a time when you should be listening). 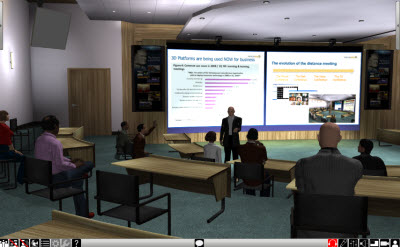 “In the end, there is nothing quite like VenueGen,” Crown said.

The company was founded in 2007 and has 10 employees. VenueGen has raised $2 million in angel money, mostly from investors who have made money with Crown and chief executive David Gardner in six other startups — ProviderLink, Peopleclick, Report2Web, DBBasics, BuildLinks, and OnSphere. All of those companies have been successful.

VenueGen has been testing its platform with potential customers for a year. So far, hundreds of companies have requested beta codes. Commercial beta testing starts today. Crown said the company licensed a massively multiplayer online gaming platform with a million lines of code; then VenueGen’s team rewrote about 75 percent of the code to come up with the product.

VenueGen will charge subscription fees of $90 per month for all meetings up to 10 users. If you want meetings for up to 25 people, you have to pay up to $490 per month. For 55 people, it costs $990 per month. Check out our interview with Gardner below.