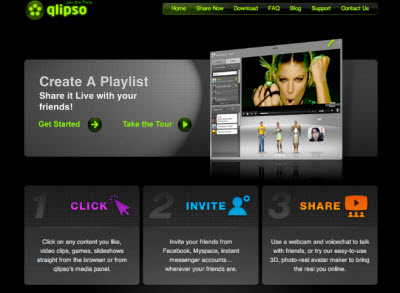 Israeli social sharing firm Qlipso is announcing today that it has acquired the assets of San Diego, Calif.-based video site Veoh for an undisclosed price. As part of the transaction, Veoh executives will work at Qlipso.

Jerusalem-based Qlipso lets people share video and other content with each other. Now it will be able to tap into Veoh’s library of more than a million videos, TV shows, online games and other content that has been posted by Veoh users.

It’s unclear at this point why Veoh wasn’t able to stand on its own. The company, founded in 2004, had raised $70 million in venture capital.

Jon Goldman, chief executive of Qlipso, said in an interview that the company saw the acquisition as a way to accelerate the process of acquiring a big audience for its services. Qlipso is in its early stages and doesn’t have revenue yet. While the size of the deal hasn’t been disclosed, the purchase price is likely considerable. But Qlipso has a lot of resources since it is backed by Jerusalem Venture Partners, Goldman said.

Veoh’s goal has been to be an Internet TV company, delivering broadcast-quality video programming. Qlipso lets members share content among multiple parties, create their own 3D avatars, talk via webcam or voice, and watch media together. The Qlipso vision is that users should be able to view content across many platforms using a single user interface. Users of Qlipso can identify themselves using 3D avatars, webcams, or Facebook thumbnail pictures. Qlipso supports all types of Flash-based media, including video, music, games, slideshows, presentations, widgets and other digital content.