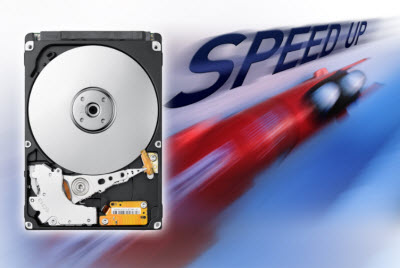 Samsung is launching a 2.5-inch hard disk drive today that can store 640 gigabytes of data. That’s no big deal in the grand scheme of things — we expect little improvements like this as the five major hard disk drive makers battle for market share — but it’s worth noting that this fast mobile drive holds more than 500 two-hour movies in a standard definition format. Or, if you prefer, about 50 high-definition movies.

The new drive, dubbed the Spinpoint MP4, spins its two disks at 7,200 revolutions per minute.

While slight advances in technology don’t impress us much, it’s awesome to look at the progress over time. In an interview, H.S. Lee, vice president of storage marketing at Samsung Electronics, said to me that the market remains as Darwinian as ever as the company competes with huge rivals such as Seagate, Toshiba, Hitachi and Western Digital. But the growth rates for the technology have slowed a bit.

Areal density, or the amount of data that can be put in a given space, has been increasing at a rate of about 40 percent a year for hard drives in recent years, Lee said. That compares to increases of about 10o percent a year in the 1990s, when innovations such as giant magnetoresistance drives appeared and made it possible to pack much more data than expected into a hard disk platter.

During the recession, Samsung grew its market share in hard disks. The Korean giant has about 10 percent of the market for hard disk drives and is in fifth place overall, but it is spending heavily and hopes to grow to 15 percent in 2010. It is adding capacity at its factory in China. The notebook drives can’t perform as fast as desktop drives, but Lee believes the gap is closing. And it’s worth noting that more notebook computers are selling than desktops now. According to International Data Corp., something like 650 million hard drives will be sold this year.

Chip-based solutions are threatening hard disk drives, which has spinning disks. Flash memory chips are faster and are the storage system of choice in low-capacity systems such as netbooks, but these chip solutions are still six times to 10 times more expensive per amount of storage. Lee says he believes they will coexist.

Who wants to store 500 movies on a laptop? At some point, we all will. But for now, Samsung figures it’s the gamers, multitaskers, and other tech enthusiasts who will be the ones buying this hard drive when it goes on sale via computer makers in April.