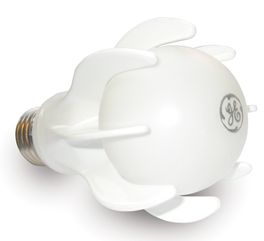 In just a few years, incandescent light bulbs have become a thing of the past — replaced by more energy efficient and affordable compact fluorescent bulbs. But now General Electric says it has a technology that could kill the standard light bulb altogether: A new light-emitting diode bulb that performs just like a 40-watt incandescent, but lasts more than 17 years.

Marketed as the Energy Smart LED Bulb, the product should hit shelves by the end of 2010, GE says. Not only does it last 25 times longer than the bulbs consumers are used to, it also substantially cuts energy use (requiring only 9 watts to emit the same 450 lumens) — presumably saving homeowners cash off their energy bills for more than a decade.

The one catch? Its price tag exceeds $40. Who will be willing to pay that much when people are used to buying a four-pack of bulbs at the grocery store for under $10? GE says it has faith that consumers will weigh potential savings against upfront cost, but this has never been a strength of the mass market.

The GE bulb is revolutionary for several other reasons. One of the reasons LEDs haven’t been widely adopted for general home and workplace lighting is because their beams tend to be focused, rather than diffuse. One of the companies working on this problem is Bridgelux, which just came out with its own screw-in LED bulb, called the Heleion. The Energy Smart LED bulb uses plastic structures wrapped around the glass to more evenly distribute the light.

GE also plans to market the new product as safer than regular bulbs. It doesn’t contain mercury, making it easier to dispose of without worrying about toxic waste or watershed contamination. And it doesn’t need to heat up to cast off light, making it less of a fire hazard than its predecessors.

The competition in the LED market is now being fought on three fronts. First, who can come up with an LED bulb to rival 60-watt incandescents, giving consumers more options? Second, who can create a screw-in LED bulb that can literally replace the bulbs we’re using now in traditional lighting fixtures? And third, who can do it at the lowest cost? Bill Watkins, CEO of Bridgelux, predicts that his company will have its interchangeable LED bulbs available for below $10 in the next year or so.

Bridgelux is also pursuing a different marketing strategy that GE might want to consider. Instead of selling LED bulbs to consumers in stores like Home Depot and Safeway, the company plans to target the people who make lighting fixtures, including architects and contractors. On top of that, it is focusing on the commercial lighting industry.

Watkins argues that companies are much more likely to adopt general LED lighting than homeowners. Why? Because companies keep more precise tallies on how much they are spending on lighting versus how much they are saving on their energy bills. A simple cost-benefit analysis will show that the LED bulbs pay for themselves over time, he says. Homeowners don’t look that far ahead.

If GE, Bridgelux, Osram Sylvania, Panasonic and others successfully infiltrate commercial lighting, they could build up a nice cushion to bring down the cost of LED lighting for the residential market — maybe within the next two years.