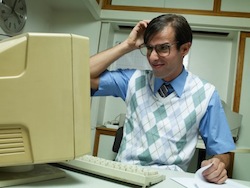 If you’re a Twitter user, you’ve probably had a moment where someone you know has complained that they “don’t get” what the  microblogging service does. How does posting 140-character messages help them?

These users may have signed up. But then they couldn’t figure out how to find their friends, who to follow, or what to do. Add to that Twitter’s insidery language of retweets, shortened URLs, and compact slang, and you’ve got a real challenge. Twitter chief executive Ev Williams said today that the company is trying to address this problem.

“Twitter is too hard to use,” he said while speaking at Chirp, Twitter’s developer conference in San Francisco. He later added, “We’ve known this for a long time, but it was growing too fast for us to address these issues.”

For example, he showed a Google search where he started typing in “I don’t get” — the second suggested search (after “I don’t get drunk I get awesome”) was “I don’t get Twitter.” And Twitter was the only product on that list.

Twitter’s retention numbers became the subject of controversy last year, when Nielsen reported that Twitter, while growing fast, was not keeping as many new users as Facebook or MySpace did in their early stages of growth.

Now, however, Twitter has created a new “onboarding” team, whose goal is “getting users from awareness to engagement,” Williams said. The team revamped the signup process, which has increased retention by 20 percent, it has redesigned the Twitter homepage, and there is more to come.

These efforts are critical to assuring growth beyond Twitter’s already-impressive already numbers. While Twitter has the requisite hockey-stick, it’s still small in reach compared to Facebook, MySpace, and other older social networks. It aspires to become a product for a truly mass audience, and make money from that audience through advertising. It can’t afford to turn off the newbies.