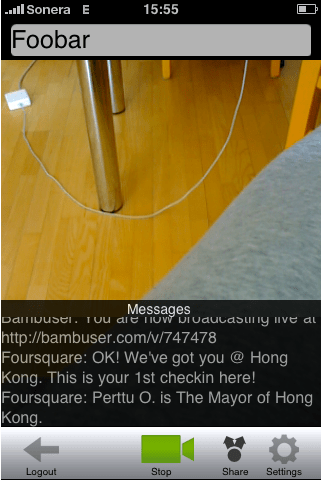 Swedish mobile video service Bambuser announced in a blog post that the company is bringing its live video streaming to the popular check-in service, Foursquare.

Bambuser was covered by VentureBeat at length in March.  The service is used to broadcast live video online from a smartphone. Now, Bambuser users can share a link to their live video broadcast on Foursquare as well as checking in at the venue. If the Foursquare account is connected to a Facebook account, the stream will be shared on Facebook as well (pictured).

Bambuser already lets users post video links on all the major social networks such as Facebook, Twitter, MySpace, Tumblr, Brightkite, FriendFeed, and so on. Bambuser says Foursquare integration brings more context to the check-in function as people can show what the venue looks like, and what is going on there at the moment.

Bambuser is competing with a bunch of other start-ups (such as Ustream, Qik, and Knocking) in the live mobile video streaming space. Other than integrating the service with popular social networks and location-based services, Bambuser is trying to promote the technology to journalists to stream footage from location. Bambuser says the technology is already being used by some emergency responders to record accident and crime scenes.