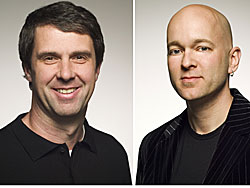 Robbie Bach and J Allard, two key leaders in Microsoft’s entertainment business, have both spoken up about why they’ve decided to leave the company in interviews with TechFlash.

Allard’s interview with TechFlash was brief. Allard (pictured, right) said the departure did not have to do with the cancellation of Courier, the tablet computer project he was working on. He also said he doesn’t plan to work for Apple, Google or any other Microsoft rivals. After 19 years at the company, he said, he wants to devote more time to his personal interests, particularly adventure sports. (Here’s his goodbye note to his staff).

“I’m really going to take a step away and challenge myself on some of these fronts that have just been musings in my head,” he said.

But Bach (pictured, left) talked more extensively about his tenure at Microsoft and his decision to leave. Here are some of the nuggets I’ve pulled from the Bach interview.

On why Bach is leaving:

The business seems like it’s in a good position. So, it’s an opportunity for me to step back. And when I step back, I say, look, I love what I do, I love the business, I love the company, but there’s other things I want to do going forward. I’ve got personal things I want to do, we’ve got family things we want to accomplish, I’ve got things I’m doing with the Boys & Girls Club and some other organizations that are important to me. And it’s really tough to try to do all those and do the 100 percent work that I want to do here. With the business in a good shape with a good leadership team, now seemed like the logical time.

On why Allard and Bach are leaving at the same time:

On whether Bach discussed with CEO Steve Ballmer whether he could have the top job:

Bach: Never asked. You know, he’s known for a long time that I love what I was working on and love E&D and the consumer space, and things we’re excited about. And I think I have a great job. I mean, that’s not — this isn’t about the job, it’s more about my personal future than it is about the job itself.

On the significance of Project Natal (gesture control system for the Xbox 360):

So, there’s a tremendous opportunity from a business perspective to produce a new experience for people without shipping a new console. I mean, that’s sort of the Holy Grail in many ways of the console world is how do you ship completely new game experiences without actually forcing everybody to start over again, and I think Natal certainly presents that opportunity.

You know, now when I think about the broader impact, I think you’re going to feel that over 12, 24, 36 months, because I think we’ll do some great experiences out of the gate, and people will say, wow, that’s really cool, and then the creative teams will really hit their stride, then the technology team will really hit its stride, and how it integrates with Live will get enhanced. Because it’s software and services oriented, you’ve got three, four years of some really cool innovation that can happen.

So, for me it’s a jumpstart catalyst. It’s a midlife kicker for the 360, and it’s an opportunity to really drive that business in a dramatic way.

On not shipping Courier:

Courier, first of all, wasn’t a device. The project and the incubation and the exploration we did on Courier I view as super important. The “device” people saw in the video isn’t going to ship, but that doesn’t mean we didn’t learn a bunch and innovate a bunch in the process. And I’m sure a bunch of that innovation will show up in Microsoft products, absolutely confident of it.

And you know, it’s hard internally because we have some — we have a strong shipping culture. People want to create products and ship it, which is really cool. But you have to make sure when you’re doing incubations that people understand, hey, sometimes the power is in the ideas you learn and the things you carry forward, not necessarily just in shipping something.

Well, tablet is an area that will evolve going forward. Certainly it’s a focus for what we’re doing in the Windows space, and how they’re thinking that space. We’re going to have a bunch of netbooks and tablet stuff that’s in the works there. We’ll just see how that evolves. I don’t think there’s anything earth-shattering about that. It’s just another set of devices, and we’ll figure out how we make sure we bring a good offering to consumers.

On losing money on the Xbox business: