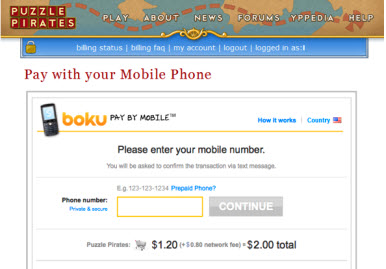 In a vote of confidence for mobile payments, Boku has raised a new round of funding from venture capital firm Andreessen Horowitz.

Silicon Valley tech veterans Marc Andreessen and Ben Horowitz studied the fast-growing mobile payments market and decided to put their money behind San Francisco-based Boku. The amount wasn’t disclosed. Ron Hirson, senior vice president of product and marketing, said in an interview that the new round of funding was strategic and the company is happy to get advice from the venture firm’s legendary founders.

Boku lets you use your mobile phone number to pay your bills in online applications such as Facebook games. When you want to buy a virtual good, you enter your phone number. You get a confirmation text message, then you hit “y” to complete the purchase. The transaction is then billed to your mobile phone bill. It’s a very simple system that removes some of the friction from online payments, partly because its simpler to remember you phone number than it is to get out your credit card to enter a number every time you do a transaction. That’s why Boku has more than 1,000 participating merchants and works with 200 mobile carriers across 60 countries. Hirson said business is growing fast.

Some people get tired of entering a credit card number over and over. Mobile payments have already taken off big time in Europe and Asia. But the big holdup right now is that mobile carriers in the U.S. have been taking high fees of 30 percent or more on mobile transactions. Hirson said that is starting to come down, particularly because Boku is proving that the rate of canceled transactions is pretty low.

“We did an extensive review of the mobile payments space and the players before deciding to work with Boku,” said Andreessen in a statement. “We feel that Boku’s management team along with the company’s market-leading merchant relationships, global coverage, and technology will be a powerful combination as they continue their aggressive growth plans in a rapidly changing space.”

So far, the No. 1 reason people use mobile payments is to pay for virtual goods in Facebook games or virtual avatars/worlds such as Meez, Stardoll,  or WeeWorld. Electronic Arts uses Boku as a payment option in its Battlefield Heroes online game. But Hirson said there are signs that the market is expanding beyond games to other apps. The company’s new executives will be responsible for growing the new markets.

Andreessen and Horowitz started companies such as Netscape and Opsware and became so wealthy from those deals that they were able to set up their own fund year, investing in companies such as Skype and Zynga. Boku previously raised $38 million in two prior rounds from Benchmark Capital, Index Ventures, Khosla Ventures and DAG Ventures.

Boku was founded in 2008 and bought the startups Mobillcash and Paymo to jumpstart its payments business. The company has 50 employees. Rivals include Zong, PayPal, BilltoMobile, credit card companies and other direct payments providers.