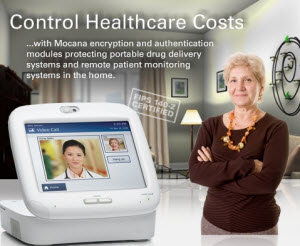 Mocana has raised a round of strategic funding from Symantec to protect the “Internet of things.” Mocana’s technology protects all of the tiny portable gadgets that are becoming Web-connected, from watches to home healthcare monitors.

The amount of the investment was not disclosed. Other investors include Southern Cross Ventures and Shasta Ventures. San Francisco-based Mocana plans to use the money to expand its product lines, increase marketing, and build its overseas business. Mocana and Symantec plan to partner on security for non-PC smart devices. The project is called Norton for Smart Devices.

At some point, Mocana believes that the Internet of things will be far bigger than the PC market as the Internet infiltrates just about everything we do — some estimates already put these devices as outnumbering PCs by 5 to 1. Securing these devices requires software that resides both on the device and in the web-connected cloud, or internet-connected data centers. It is difficult to do because small devices often don’t have the processing or memory horsepower to handle security tasks.

Some 130 manufacturers already license Mocana’s solutions, including Panasonic, Cisco, Honeywell and General Electric. The technology is relevant, considering a British professor recently demonstrated he could infect small devices with a computer virus by implanting a wireless chip in his skin.