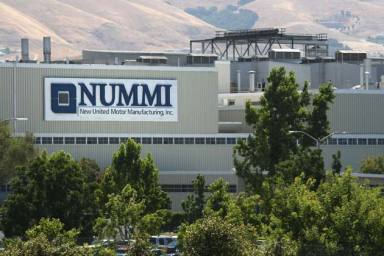 Tesla Motors released a revised S-1 filing for its IPO today — the first revision since it announced it is buying the NUMMI automotive plant in Fremont, Calif. and working with Toyota to build new electric cars. The new draft contains two key nuggets of information: Tesla is buying the plant for the bargain price of $42 million, but doesn’t yet have any formal deal with Toyota to build a new electric vehicle there.

For anyone who followed the hyped news of the Tesla-Toyota partnership last week, it would seem that the two companies had signed an official agreement to build what Tesla CEO Elon Musk was calling a “third-generation” vehicle (its Model S sedan is the second generation) together. In fact, the purchase of NUMMI only seems to make sense if this joint car project comes to fruition — the Model S is only supposed to make up a small fraction of the vehicles produced at the facility.

“In May 2010, Tesla and Toyota announced their intention to cooperate on the development of electric vehicles. This may involve the production of vehicles or powertrain components. However, we have not yet entered into any agreements, including any purchase orders, with Toyota for such arrangements and we may never do so.”

This is surprising, considering that Musk is already enthusiastically talking about not just one joint Tesla-Toyota vehicle — due out in the next four to five years, he says — but multiple tandem projects using Tesla’s powertrain technology and Toyota’s components.

For now, all that is tying the major Japanese automaker to the venture-backed startup is an agreement to buy a $50 million stake in the latter if and when it goes public.

Even that pledge is conditional. According to the companies’ Common Stock Purchase Agreement, if Tesla doesn’t have a successful IPO by Dec. 31 of this year, Toyota is no longer obligated to the buy these shares. This puts even more pressure on the company to make it to an IPO at all costs. While it’s using its $465 million Department of Energy loan to buy NUMMI, this money can’t be applied to the development of the Model S or any other products. Tesla needs the money from a public sale to make this happen.

Picking up the plant — formerly co-owned by Toyota and General Motors — for $42 million sounds like a steal. The facility has the capacity to churn out up to half a million cars every year, and it could employ as many as 10,000 direct employees, contractors and supplies. It could, theoretically, turn Tesla into a major automaker competitive with GM, Nissan and the like.

One catch: Tesla’s acquisition only includes the plant and the property, not the manufacturing equipment. If it wants to retain any of that, it will have to buy it at auction (probably at a reduced price). If, however, the existing infrastructure isn’t suitable for electric-vehicle production, Tesla will have to shell out for a staggering amount of equipment, just to get operations up and running.

Tesla and Musk have a history of making announcements that sound sweeter than they really are upon closer inspection. Last July, when the company declared profitability — with a margin of just $1 million — a number of reports said the claim was all smoke and mirrors. And when Tesla first filed to go public at the end of January, it conveniently provided financial reports only through the end of 2009’s third quarter, omitting the fourth quarter’s dismal sales. That data has since been included, but there’s a trend here.

Regardless, Tesla’s success appears to hinge entirely on it going public this year. And as far as its relationship with Toyota goes, despite CEO Akio Toyoda’s enthusiasm, it had better hit that Dec. 31 deadline.