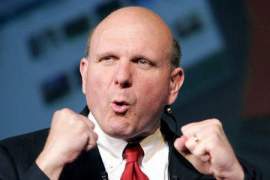 Update: Microsoft PR has tweeted that Ballmer will not appear at WWDC.

Apple rumor spin control: In just over a week, Steve Jobs will take the stage at Apple’s annual Worldwide Developers Conference for software engineers who develop applications and extensions for Apple’s computers.

A lone industry analyst has claimed to have inside info that Microsoft CEO Steve Ballmer will make an appearance during a seven-minute segment of Jobs’ June 7 WWDC keynote that he says has been blocked out for Microsoft.

That would be really cool. Ballmer could bring the house down by reprising his “Developers Developers Developers Developers” chant from a 2005 Microsoft event. Ballmer is an icon to Mac developers, even those who claim to despise him. And based on his appearances next to Bill Gates at past events, he’s one of the few tech execs who could hold down the other half of a stage run by Steve Jobs.

But no. Microsoft’s seven minutes at WWDC are much more likely to go to a second or third-tier manager, as noted by the very reporter who ‘s spreading the rumor. Microsoft traditionally sends someone like Rosalyn Ho to assure Mac fans that Microsoft’s software will continue to work on Apple’s hardware. In the past, I’ve wondered what Ballmer is doing that’s so important he can’t jet in and out of San Francisco, as the President of the United States just did. It comes across as some sort of weird Microsoft tactic to not make Apple seem really important to them. But that’s the pattern.

Barron’s writer Eric Savitz, who spread the Ballmer-appearance rumor on his Tech Trader Daily blog, covered his own behind at the end of his carefully worded “could be” post by parenthetically adding “Or if not  [Ballmer], at least Bob Muglia, who runs Microsoft’s server and tools business.”

At least Bob Muglia? Oh, come on. If there’s a Microsoft employee onstage on the 7th, but it isn’t Steve Ballmer, it doesn’t count.