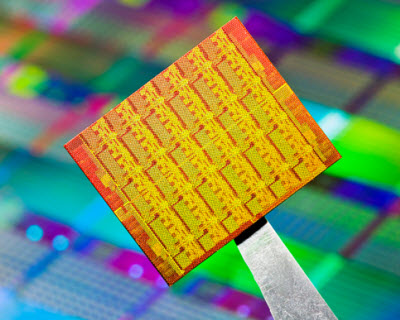 Intel showed off its plans today for a microprocessor with more than 50 cores, or computing brains, on a single chip.

Code-named Knights Corner, the chip will be made with Intel’s as-yet-unfinished 22-nanometer manufacturing process. With each step forward on the manufacturing process, Intel can cram more components onto a single chip. So it will be able to add many cores to a single chip with the 22-nanometer generation, which can build structures as small as 22 billionths of a meter in width.

The chip would have many x86 cores, or Intel-compatible computers, on a single chip. The software running on the processor would use the many different processors to work together on parallel tasks. The Knights Corner sounds very similar to the Larrabee graphics chip Intel canceled. Larrabee was targeted primarily at graphics processing, while Knights Corner appears to be a server chip. The design hasn’t been fully unveiled yet, and no release date has been set.

Intel is seeding developers with development kits so they can produce software that runs on the chips. The company is evidently targeting servers and workstations first. Intel did say, upon canceling Larrabee, that it had found an application in the server computing space for some of the Larrabee technology. Intel said that the single-chip cloud computer was also an inspiration for the design.